What lives in the trees, has a blue face, is identified by its legs, and spends its days munching on leaves? A black-shanked douc langur (Pygathrix nigripes), that’s what! Meet You-bee, a douc langur orphaned by the illegal wildlife trade. The Wildlife Rapid Rescue Team rescued the adorable 6-week old from people who were exploiting her in YouTube videos after a concerned citizen reported them.

The Rescue Team brought You-bee to the Phnom Tamao Wildlife Rescue Center on February 26, 2020. Like any baby, You-bee needed round-the-clock food and care when she first arrived at the Centre. Sadly, two other douc infants rescued just weeks before You-bee both suffered from fits and died within a few days. Although langurs and other species are never housed together, dozens of juvenile long-tailed macaques were rescued around the same time and we suspect the doucs contracted a strain of herpes virus from the macaques at the nursery area. Macaques can carry the deadly virus but remain unaffected. So when You-bee arrived a few weeks later, we decided she should be looked after at the Elephant Section, far away from any macaques. Primate infants require a lot of tactile and emotional support and in the wild are often permanently attached to their mothers, or lovingly cared for by other members of the troop. At Phnom Tamao, elephant keepers Sol and Vok became You-bee’s surrogate parents and shared the responsibility of bottle-feeding her every 2-3 hours, night and day. 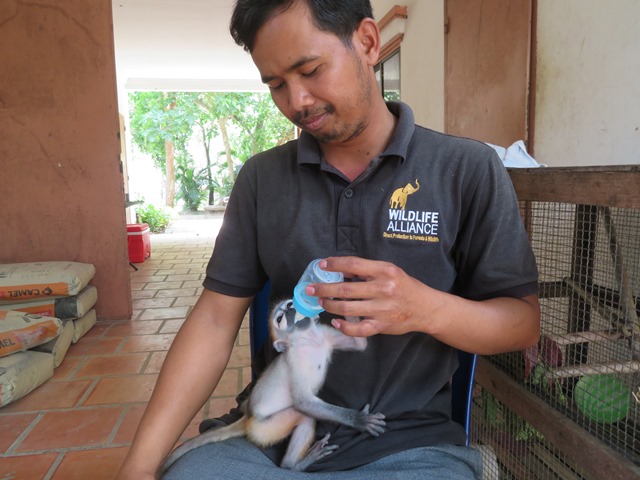 In the past, douc langurs were rarely encountered in Cambodia’s illegal wildlife trade – only 25 doucs have arrived at Phnom Tamao during the past 10 years. Yet understanding how to raise animals like You-bee is extremely important. The three species of douc langurs (black-shanked, red-shanked, and grey-shanked) are some of the most beautiful primates in the world, but unfortunately, all three are now classified as Critically Endangered by the IUCN Red List of Threatened Species. Once widespread and common throughout their ranges, today populations of all three species are severely reduced and fragmented due to human pressures such as hunting and land conversion. Black-shanked douc langurs, like You-bee, are geographically restricted by the Mekong River to eastern Cambodia and Vietnam. The relatively large number of black-shanked douc infants rescued this year makes us worry that deforestation is making the population more accessible to poachers.

Rescuing one douc can be quite a surprise, so imagine our shock when three more arrived over the following four months! In May, You-bee received her first playmate, a male rescued by rangers in Mondulkiri Province. A bit smaller than You-bee and not as confident, initially he was very vocal and clingy with the keepers. We let the two socialize at the start, stretching outside their enclosures while climbing in the nearby trees under the keeper’s supervision. At first You-bee was a bit too boisterous for the little guy, so we resumed separate play and exercise times until he was a bit bigger and stronger. A couple of weeks later, the pair was joined by a third baby douc, also rescued in Mondulkiri. She was a bit older upon arrival than the others and had a tail injury that required surgery and partial amputation. However, we are pleased to report that she has recovered well. In June, a fourth douc was rescued from Ratanakiri Province. 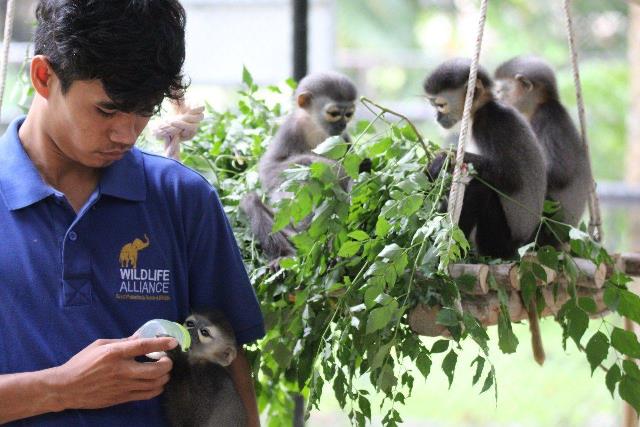 Now we have a quartet of beautiful black-shanked douc langurs in the care of our dedicated keepers at Phnom Tamao. We’re still concerned these fragile little ones may not make it because langurs are notoriously difficult to raise, but we’re treading carefully and hopeful for now. Members of the subfamily Colobinae, langurs are leaf-eating monkeys and often require a specialised diet. They need an appropriate balance of green leafy material, with only small portions of fruits and vegetables. It is believed infant langurs, like humans, acquire specialised gut flora/bacteria to help break down a diet so high in fibre from their mothers. When infants are removed from their mothers at an early age, as is often the case in the illegal wildlife and pet trades, the infants miss out on the bacterial transfer that allows them to thrive and grow into adults. In Cambodia, most langur infants are rescued from inexperienced people keeping them illegally without any knowledge of the specialist care they require. Thus, You-bee and the other doucs rescued this year were all extremely weak and underweight when rescued. You-bee and her playmates have now graduated from being bottle-fed a mix of cow’s milk with a dash of human baby formula, to eating leaves cut from the Phnom Tamao forest, and organic vegetables and sour fruits specially purchased in Phnom Penh. They are thriving and we are hopeful this diet will continue to work well for their delicate digestion. Our success thus far indicates that we may have finally cracked the mystery of how to raise rescued langur infants. You-bee is the first douc langur ever to be successfully hand-raised at Phnom Tamao. But we hope she will not be the last!

2020 has been full of surprises. You-bee and her troupe are just 4 of more than 1,500 newly rescued animals that arrived at PTWRC in the first 9 months of 2020 – more than in all of 2019. When the COVID-19 pandemic wiped out international travel, it changed human life as we know it and decimated our funds to care for rescued wildlife. We rehabilitate and release whenever possible, but You-bee and her new troupe will require lifelong care. You can help feed and care for animals like You-bee by joining our #StandByWildlife campaign.