The global pandemic has been a difficult time for us all. At Phnom Tamao Wildlife Rescue Center our ability to raise funds to care for our rescued animals has been seriously impacted. Worldwide travel restrictions have limited visitors on our behind-the-scenes tours, which once raised crucial funding for the center. In these uncertain times we’ve had to get creative, enlisting the help of our ambassador elephant, and resident artist, Lucky. In 2003, Lucky was taught to paint by head keeper Try Sitheng, using positive reinforcement training. After a brush stroke, she receives a food reward that is not part of her main diet. Whether she participates is entirely up to her. But ever the diva, she enjoys the additional attention from this activity, and in exchange for a few bananas and carrots, she gladly uses her artistic abilities to help us. Lucky arrived at Phnom Tamao in 1999 as a six-month-old calf after she was found orphaned and alone in the jungle. Sitheng was tasked with her care. Baby elephants need constant attention, and for two years Sitheng never left her side (even to visit his own family). He bottle-fed her every two hours, took her for walks in the forest to explore and learn which leaves to eat, and stayed overnight, sleeping in a hammock beside her.

Now an adult, Lucky shares an enclosure with Chhouk, a young male elephant who lost his foot to a snare as a calf and now wears a prosthetic shoe. The two spend most of the day together. However, this has not diminished her bond with Sitheng, who still accompanies her on her two daily walks in the forest. His first job every morning, before attending to his other responsibilities, is to greet Lucky, lest she become jealous. You can commission your very own Lucky painting, selecting colors and canvas size, or choose something from her gallery of finished work. Each painting is unique and stamped with Lucky’s very own monogram. Through the purchase of Lucky’s one-of-a-kind artwork, you are directly supporting the care of Lucky and over 1300 other creatures rescued from the illegal wildlife trade and cared for at Phnom Tamao.

Traditionally, elephants in captivity have been trained and controlled through brutal practices, such as bullhooks and breaking ceremonies. The relationship between Sitheng and Lucky demonstrates that to interact peacefully with humans these gentle giants need not be abused. Elephants are highly intelligent animals and require extensive mental stimulation. Painting for Lucky is a creative form of enrichment. At Wildlife Alliance, we stand firmly against the unethical exploitation of elephants or any other creatures and are dedicated to the welfare and conservation of Asian elephants in captivity and the wild. 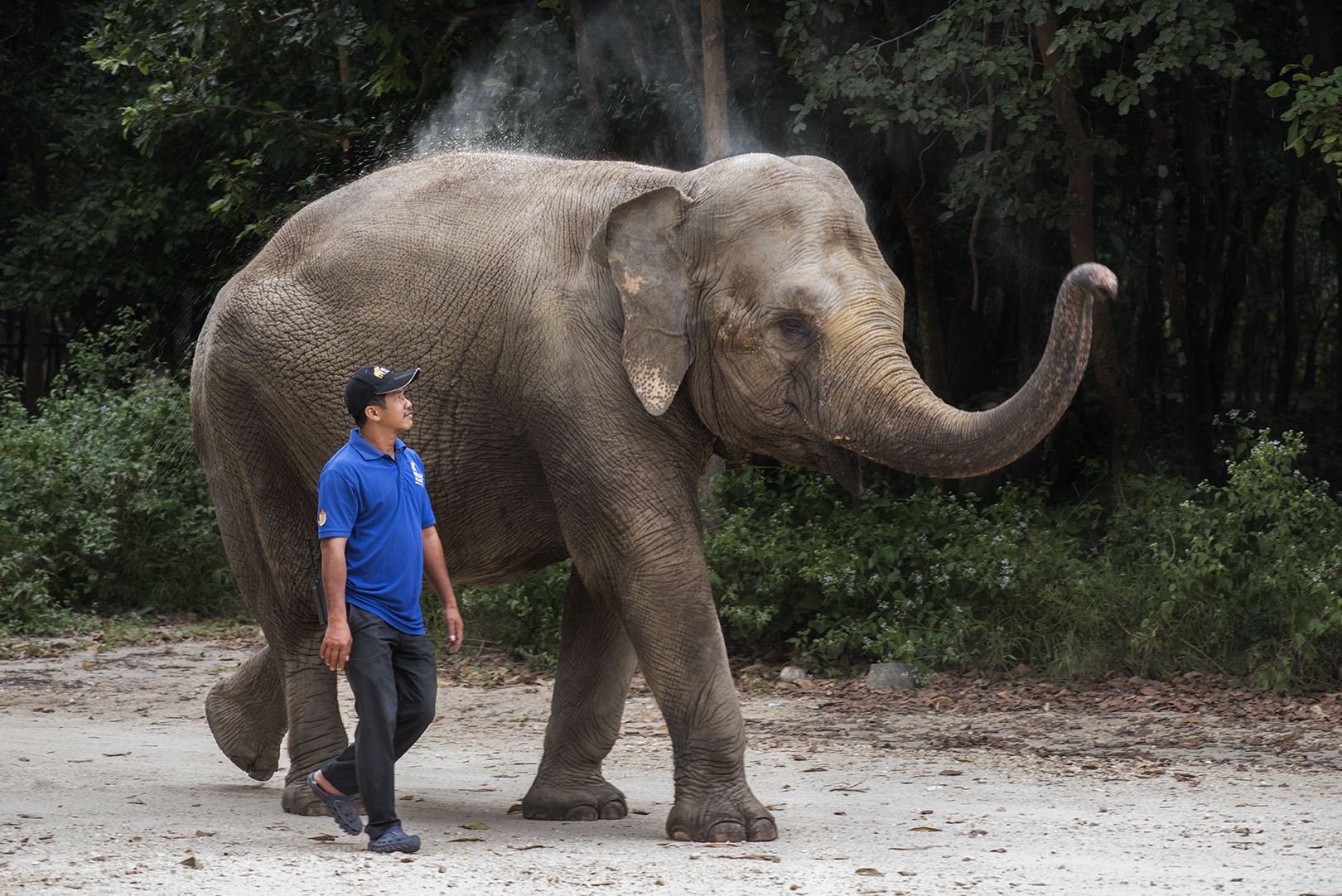