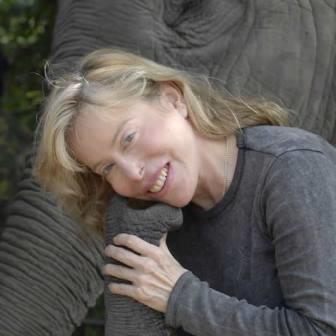 Dedicating her life to protecting rainforests and wildlife in some of the world’s most hostile and rugged environments, Suwanna Gauntlett has set the trend for a new generation of direct action conservationists. Suwanna has designed, implemented, and supported bold, front-line conservation programs to protect threatened rainforests, save endangered wildlife populations, and directly address the causes of poverty in the tropical belt. Originally from San Francisco, Suwanna grew up in Brazil and Europe. A formative experience with a jaguar tortured by poachers in the Brazilian rainforest sparked her early connection to the environment. After pursuing her undergraduate, master’s, and doctorate degrees in France and Switzerland, she began consulting for wildlife conservation organizations, assisting them with strategic planning for direct protection to wildlife in danger. In the late 1980s and early 1990s, Suwanna worked on dolphin protection with the marine conservation organization Earthtrust to obtain a ban on drift netting in the South Pacific and to firm up an agreement with Heinz Corporation to produce certified dolphin-free tuna. In 1994, Suwanna joined forces with Global Survival Network to save the Amur (Siberian) Tiger in the Russian Far East, bringing the population from only 80 individuals in 1994 to nearly 400 individuals by 2000. In India, Suwanna worked with the Wildlife Conservation Society of India to reverse the drastic decline of the Olive Ridley turtle along the coast of Orissa. Nestings were brought back from an all-time low of 8,700 in 1998 to 600,000 in 1999 and over 1 million in the year 2000. In Ecuador, responding to the government’s international appeal for help in 1998, Suwanna assisted with the expansion of the Galapagos Marine Reserve from 5 to 40 nautical miles by providing three years of technical assistance, training and equipment to conduct high seas law enforcement operations, and constructing two additional land bases in the northern islands.

At the same time, Suwanna founded and managed The Gauntlett Group, an environmental consulting firm for multi-national corporations, from 1989 to 2000. A pioneer in sustainable development, The Gauntlett Group brought environmental management training to over 100 North American companies and consulting services to such large corporations as Alcoa, Fujitsu, Pfizer Chemicals, Procter & Gamble, Xerox, Louis Vuitton Moet Hennessy (LVMH), the City of San Francisco and Nike.

As a forerunner of the international norm ISO 14001, The Gauntlett Group’s Environmental Management Systems helped companies to systematically prevent pollution at the source and reduce natural resource use in all areas of operations, in environmental policymaking, product design, material purchasing, management of factory floor operations, and customer use and disposal.

After 11 years of corporate consulting, Suwanna felt, despite her efforts and that of her team, corporations were not reducing sufficiently their negative environmental footprint, especially when operating abroad in developing countries. Suwanna decided to stop consulting for industries and to start her own environmental advocacy group. She founded WildAid, a direct action nonprofit focusing on saving endangered wildlife in the tropical belt, where 90 percent of the planet’s biodiversity is concentrated. She put her consulting experience at the service of governments instead of corporations and formed partnerships with departments such as Forestry Administrations and National Park Offices to assist in strengthening park management and stopping wildlife trafficking.

To found WildAid, Suwanna joined forces with three other environmentalists that had a good track record in direct field protection and measurable results in saving endangered wild species. In 1999, Suwanna Gauntlett, Steven Galster, Peter Knights and Steve Trent pooled their resources and programs together as WildAid: Galapagos Forever in Ecuador, Operation Tiger in the Russian Far East, Alaungdaw Kathapa National Park in Burma, Kao Yai National Park in Thailand, and two international campaigns in 7 countries, the Shark Campaign and Asian Conservation Awareness Program (ACAP). During the director’s programmatic planning process, a strategic decision was made to expand existing Burma and Thailand programs into neighboring Cambodia where 50% of land mass was still covered by tropical forests and was habitat to globally significant wildlife species. In January 2000, Suwanna started establishing ties with the Cambodian Department of Forestry and Wildlife Protection and National Park Management office who informed her that the biggest threats to biodiversity were encroachment on forestland, illegal logging and wildlife poaching. They said they were puzzled by conservation groups that studied wildlife and forests but only produced reports. The departments were eager to strengthen their own capacity for law enforcement and receive training, equipment and technical assistance from WildAid for arresting poachers and loggers.

In June 2000, Suwanna conducted a country-wide wildlife trafficking assessment and an evaluation of the strengths and weaknesses of the Forestry Department’s Special Forestry Task Forces in charge of law enforcement. This included a three-month field survey with several undercover investigations and two sting operations that netted seven tigers and two bears. After testing the law enforcement capacities of forestry officers in seven provinces, Suwanna designed and facilitated a law enforcement training program, together with one of her WildAid co-directors. The training was delivered in early 2001 to 50 officers from the Forestry Administration and the Royale Gendarmerie Khmer.

Suwanna then moved quickly, signing several Memoranda of Understanding with the department of forestry to create the first wildlife law enforcement mobile unit in the country (to date, still the only one in Southeast Asia). The Wildlife Rapid Rescue Team (WRRT) was launched in July 2001, patrolling the entire country and stopping illegal wildlife shipments in cities, on roads and national borders. In just the first six months of operations, WRRT rescued 2,800 live animals and confiscated 2.3 tons of wildlife meat and parts.

However, this success came with new challenges: the WRRT was rescuing an increasing number of animals every month that were now flooding the government wildlife rescue center. Phnom Tamao Wildlife Rescue Center had no infrastructure and little funding and was considered “the place where animals go to die.” The rescue center needed to be upgraded with humane enclosures, enough food and clean water. Proper veterinary care needed to be developed and keepers needed to be trained. A garbage system had to be put in place. To address this urgent need, Suwanna and her team started immediately to raise funds. By January 2002, she had created a professional team of veterinarians and wildlife husbandry specialists and raised funds for food and medications. The new technical team provided ongoing technical assistance to the government to improve the facility: building new enclosures, training staff, instituting new food regimens and care protocols for the animals. In just a few years, the team turned the facility around. Phnom Tamao is regarded today as the foremost wildlife rescue center in the region.

During the same period, Suwanna and co-director Steve Galster assisted the Department of National Parks to train and equip rangers in Bokor National Park and create the National Ranger Training Center that trained over 500 rangers in the country.

In 2002, based on Wildlife Alliance’s success in fighting the wildlife trade and protecting Bokor National Park, the Department of Forestry asked Suwanna for assistance to protect the Southern Cardamoms. The construction of a new freeway had gutted through over 150 km of the Southern portion of the Cardamom Mountain Range, bringing in uncontrolled wildlife poaching and deforestation. Cambodia’s largest rainforest was going up in flames: 35 to 40 fires were burning the forest every day to clear land for real estate deals. 37 elephants and 12 tigers were killed in just 18 months. Suwanna helped the Department of Forestry organize three small ranger teams to address the urgency of the situation. She started building political will at all levels of government to bring illegal activities under control. Suwanna worked closely with the provincial governor to stop his district governors from selling state forests under the table. She appealed to the Ministry of Agriculture, Forestry and Fisheries for strong intervention to return grabbed land back to State. She worked with three ministries to resolve land grabbing and create a long-term land management plan. In just the first 9 months of ranger operations, 401 cases of land grabbing were stopped, 360 illegal land titles were cancelled, elephant killings were reduced by 98 percent and tiger killings by 50 percent. A long-term land use plan was finalized in 2003 that provided precise zoning along the freeway: village zones were clearly delineated to allocate land for community livelihoods. Outside the villages, forestland was declared strictly protected and visible demarcation posts were installed on the ground. Thanks to persistent vigilance and constant presence on the ground by Wildlife Alliance, the 2003 zoning agreement is still enforced today, ten years later.

These initial efforts then developed into the Southern Cardamom Forest Protection Program implemented by the Forestry Administration and Wildlife Alliance over the entire Southern Cardamoms. The program includes 6 ranger stations, a tropical reforestation program, a wildlife rehabilitation station, sustainable agriculture and community ecotourism in 4 communes that provide the poorest landless farmers with jobs and income, land and capital, technical know-how and access to markets. Elephant populations are now rebounding with frequent elephant sightings today throughout the Southern Cardamom Range. Wildlife Alliance worked successfully with the Forestry Administration, 5 ministries and the highest levels of government to obtain cancellation or reduction in size of 34 economic land concessions for mining and agro-industry and thus saved forest from destruction representing half the size of Yellowstone National Park. Today, nearly 2 million acres of continuous forest have been maintained in the Southern Cardamoms, one of the great forest conservation achievements in Asia.

For these efforts, Suwanna Gauntlett has been featured on CNN, BBC, National Geographic, Discovery Channel, in the New York Times Magazine and other global media outlets. She has received two medals from Prime Minister Hun Sen for her contributions to Cambodia’s people and environment. She continues to work tirelessly to advance the goals of Wildlife Alliance in Cambodia and is currently developing a sustainable development model for the tropical belt to combat deforestation, wildlife extinction and climate change.

Suwanna Gauntlett, HE Say Samal – Minister of Environment and HE Mithona Phouthong – Governor of Koh Kong

Suwanna Gauntlett and HE Say Samal – Minister of Environment 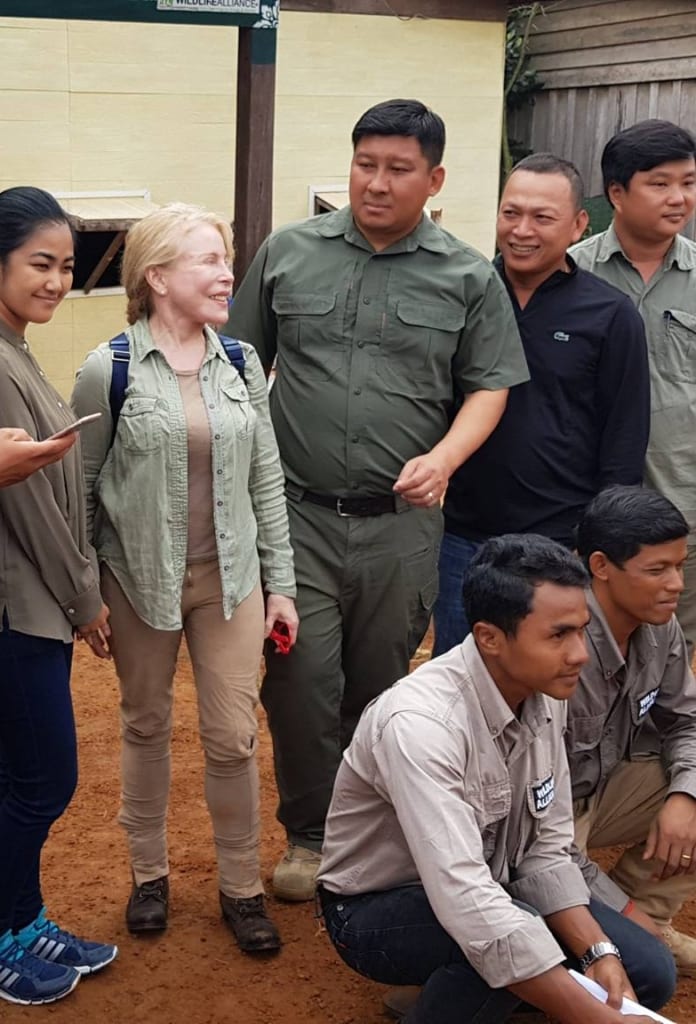 Suwanna Gauntlett, HE Say Samal – Minister of Environment and HE Mithona Phouthong – Governor of Koh Kong 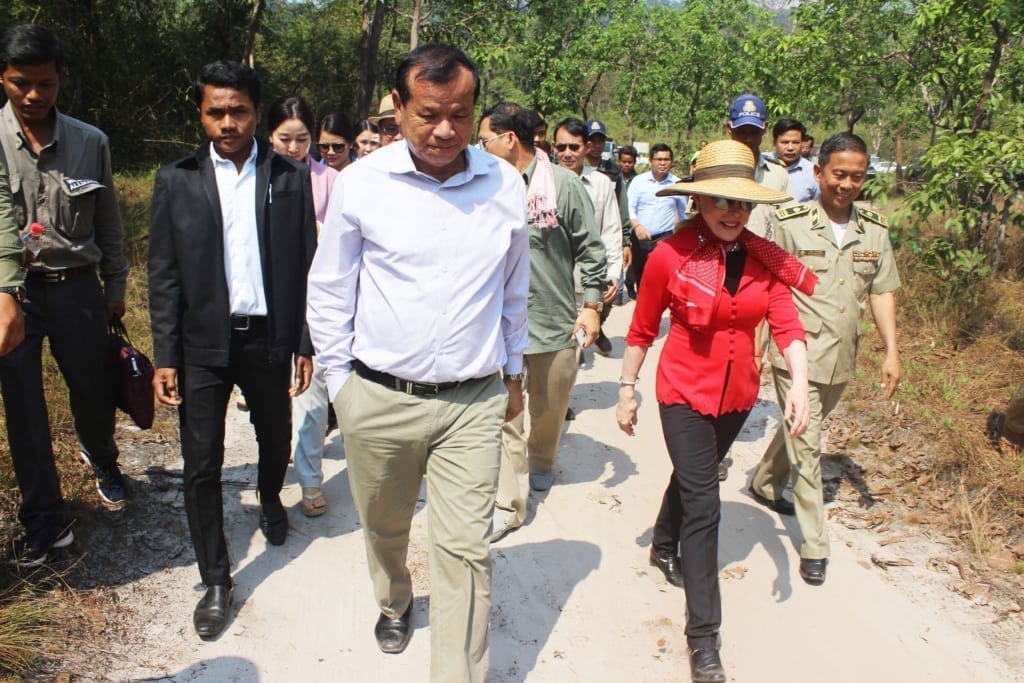 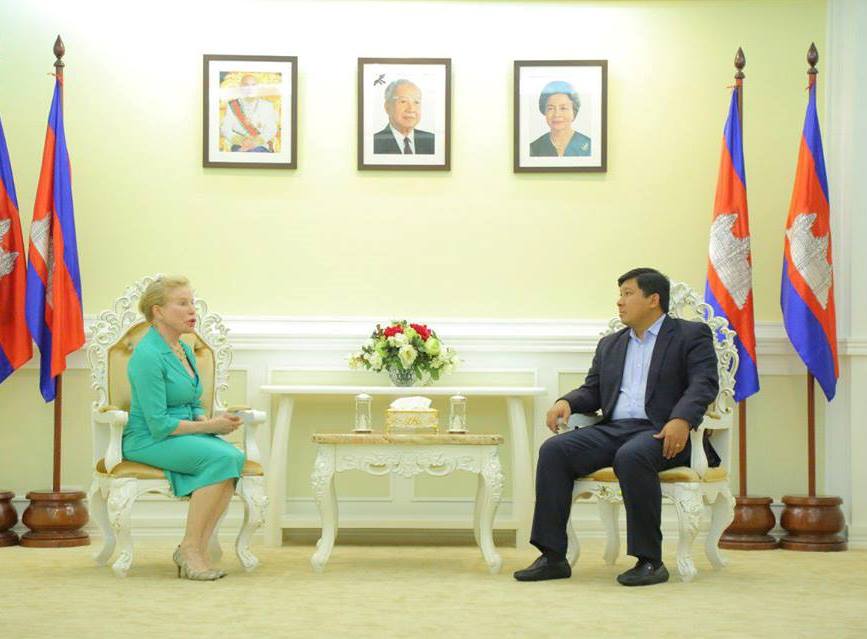 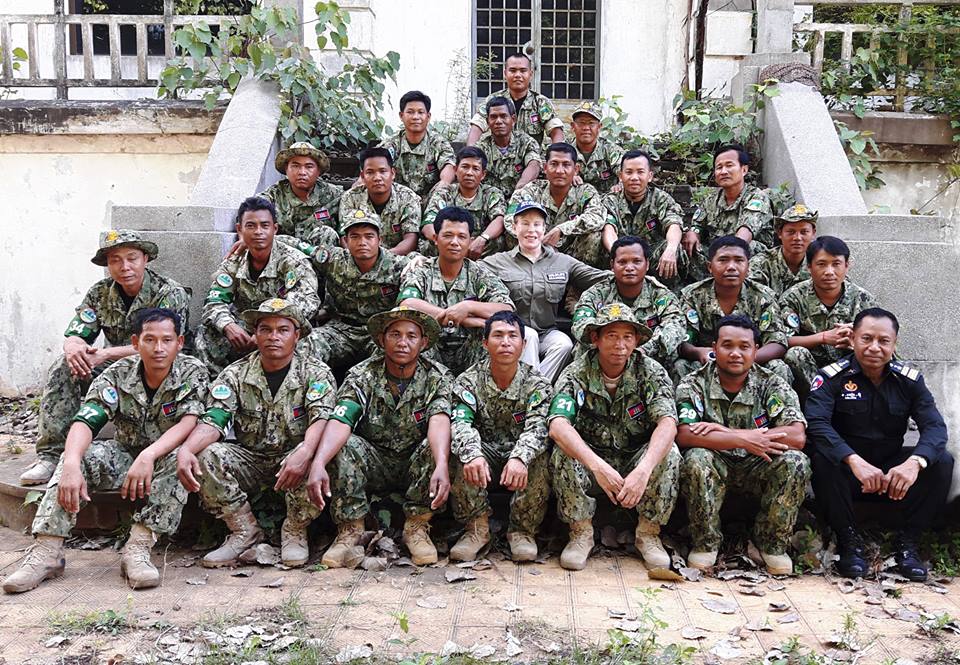