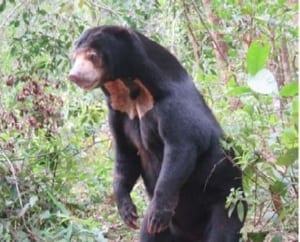 The dry season came to a premature end this year and the rains have been torrential if a little intermittent. The sun bears we are preparing for release at our Wildlife Release Station in the Southern Cardamom forest 7km from the village of Chi Phat in Koh Kong province are well. Young male, Tela, seems to be spending less time with surrogate mother, Sopheap. Sun bears are solitary and he may be feeling it is time to start making his own way in the world.

The onset of the rains means there is now an abundance of natural food in their enclosure and I asked our staff to reduce the bears’ food as Sopheap is much too fat! The young great hornbill that we allow to move freely around camp is beginning to fly. The injured wing of the great hornbill we keep caged at present seems better and he can fly. The time is approaching for us to give him the opportunity to broaden his horizons…. 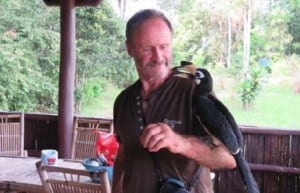 We released a second pair of Oriental pied hornbills following the departure of the first pair and all went well to start with. The female is extremely tame and seems to enjoy humans more than the company of her own kind. At first the male was stand‐offish, but gradually started attacking our guests when they arrived. Embarrassing! We bought water pistols to help protect the visitors and this worked to some extent, but Bunthoeun, my colleague who manages our release projects, purchased wide‐brimmed hats. Guests are now asked to wear these and the problem seems to have been resolved.

In April we released 12 red breasted parakeets we were acclimatizing. 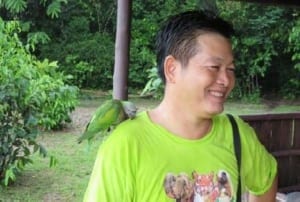 11 of these immediately flew off, and now return infrequently to take the food we continue to provide. The twelfth bird decided not to follow the others and spends her life with us, clearly preferring human company. She has a particular liking for Mr Vang, one of our resident team at WRS and flies onto his shoulder to accompany him when he travels into the forest on his motorbike. I worry that she may not return with Vang, but she seems smart enough. There have been minor skirmishes between the pair of mynahs, the hornbills and the parakeet, as they battle for dominance around camp. These are frequent, but not serious as one party takes the opportunity to chase another, with the status quo remaining unchanged afterwards.

Later in April we took two slow loris and two young leopard cats from PTWRC down to WRS to prepare for release. The lorises we have released already. There is little point keeping these animals in a cage for lengthy periods as they need no acclimatization and are always perfectly capable of caring for themselves, feeding largely on insects, fruit and tree gum. They never return for supplementary food, but we see them around and now and again get camera trap shots of them on the cameras that Bunthoeun places in the vicinity.

In May we took another half‐grown female sambar that was donated down to WRS to accompany the pair we are already acclimatizing. All the deer appear in good health, but they have all been suffering from abrasions on their legs and chests, that have not cleared up despite treatment administered by Oun, Sooern and Vang, our multi‐faceted staff at WRS. Flies constantly bother the deer, making the wounds worse. Mr Oun had the idea of giving them a mud wallow and also applied mud to the abrasions to keep the flies off. Perhaps unusual treatment, but combined with antibiotics this seems to be working and the wounds are slowly healing. 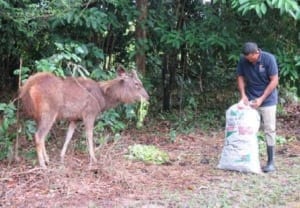 There are two animals that we released recently, but which required recapture. The first, the common palm civet raised by Mr Oun, quickly found an easy source of food in our bird enclosures. Allowing him to dine on other animals we release was not an option so we transported him to Angkor and quietly released him there to accompany the other civets we have already released following permission from Apsara. The second “recaptured” release was Lonely, our long‐tailed macaque and her young son. I knew she would cause problems, but we needed to give her the opportunity. Monkeys, unless they are controlled, quickly realize that human dwellings are a great source of food and fun! Lonely was raised at WRS and did not need much teaching! She was so troublesome and sadly we must think of other options for her as we do not want our release station to become a “zoo” with permanently caged animals. We will probably integrate her with a group of macaques at Phnom Tamao and release her deep in the forest when we feel the time is right.

Our binturongs had a narrow escape in May, when high winds and stormy weather brought a tree down on their forest enclosure. Fortunately there was no serious damage and the binties were unscathed. Heavy rain also flooded the bridges we built to cross the streams that rise in the wet season. Fortunately these go down once the rains reduce giving easier access to our camp once again.

The Community‐based Anti‐Poaching Unit (CAPU) we have set up in Chi Phat continues to patrol around WRS. We no longer hear gun shots at night and Mr. Goo‐ern, the team leader, promises there are no longer snares within a 5km radius of our release station. I feel this is perhaps a slight exaggeration, but I could be wrong as we no longer find any and it demonstrates that we are moving in the right direction in providing security for our released animals and the other wildlife living around us.

We have opened our camp to visitors to help us continue our work to release some of the animals we have rescued from the illegal wildlife trade and during the last three months 35 paying guests stayed at WRS.

Everyone loves the experience and we thank all our guests for supporting our work in this way. 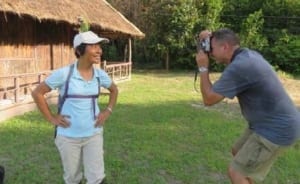 The time had come to repair the grass roof of the kitchen and eating area, which was leaking badly under the attentions of nesting mynah birds and other wildlife we share it with. Although less attractive, Bunthoeun felt it was advisable to renew with cement corrugate rather than grass and this work was completed in time for important guests who wanted to visit. The first was Birdlife International country director, Jonathan Eames and Vietnamese partner, who we hope to be working

within the area they are protecting up in Stung Treng in the near future. Following Jonathan came Brad Akins and Jason Friedman, with their Cambodian conservation team from Shinta Mani, accompanied by designer, Bill Bensley. An entertaining time as both groups is friends of ours. At WRS we are passionate about conserving wildlife and are certainly not hard nosed businessmen. When friends visit us we feel it would be impolite to charge for their stay – this is not how one treats one’s friends! Our guests at the end of June understood perfectly our predicament and the important work we are doing. We thank them for their generosity.