On the 6th of December, Moh Tom, a great hornbill, took flight back into the wilds of the Southern Cardamom Mountains. Back in 2015, the juvenile hornbill was found by our Pangolin Ranger Station with a damaged wing and his feathers plucked. Our resident veterinarian at Phnom Tamao Wildlife Rescue Center, Chenda, operated on his wing and he was brought to our Wildlife Release Station for his recovery. Thanks to our attentive staff, Moh Tom went on to make a full recovery and was prepared for his release back into the forests from which he came. Three years later, his enclosure door was left open for his triumphant return to the wild. Moh Tom was last sighted at the release station on the 13th of December and we trust he has adjusted to life back in the wild where he belongs.

Many thanks to our supporters who sponsored Moh Tom during his recovery without whom we would not be able to return rescued wildlife to where they belong in the wild! Help us care for other rescued wildlife trade victims as they are prepped to be released in their forest home by sponsoring an animal. 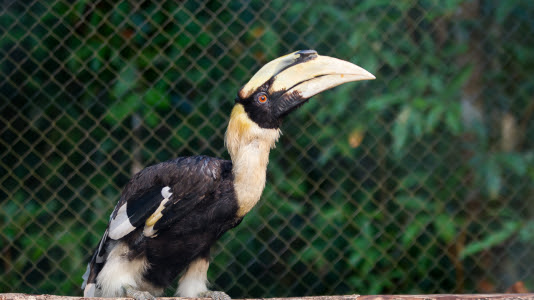