If we can ever appreciate the importance of enrichment for captive animals, now is certainly the time. Locked indoors? Going stir crazy within the same walls day in and day out? Sick of seeing the same scenery, the same housemates, everyday?! We’re all in the same boat. We’re all feeling it.  So this can give you some perspective from the animal’s who are permanent residents at Phnom Tamao.

Enrichment comes in all shapes and sizes. What works for one species, or even one individual, may not work for another. This means we have to be on our toes and constantly coming up with new ideas or reinventing old ones. Especially at the moment, when funding is tight due to the downturn in tourism, the team is having to get creative to keep costs down, but ensure our residents are being kept happy and fulfilled. Over the last few months they have been very busy! One example of cost cutting and recycling; trimming branches back in a pre-release gibbon enclosure, which ensures the occupants cannot escape, resulted in the re-branching of a silver langur enclosure. The silver langurs are smart though, and it’s very difficult to entice the entire troop into the satellite enclosure, an adjoined smaller enclosure, at the same time enabling the staff to access their larger enclosure safely without their presence. After much coaxing with some feeding enrichment, the team were successful and took the opportunity to not only re-branch their enclosure but also hang some new ladders and swings, and even re-position some of the existing structures, for a change of scenery. 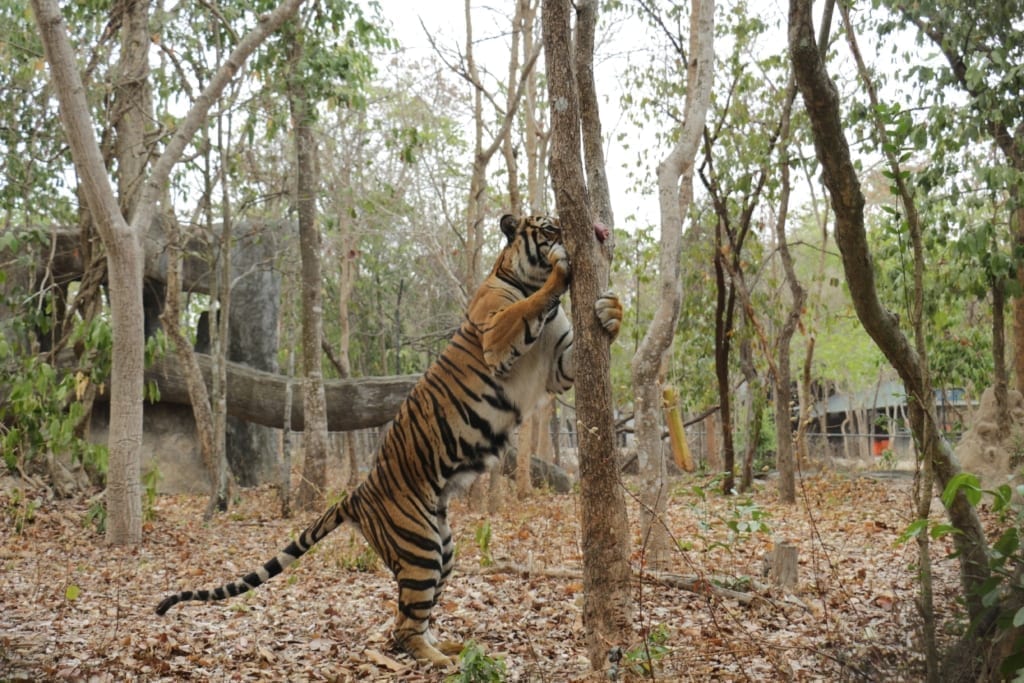 Given the additional soap and cardboard packaging we’ve recently experienced with an increase in our personal protective equipment (PPE) due to Coronavirus, we’ve started putting this packaging to use with our juvenile primates by providing them with feeding packages. Imagine opening your Christmas or Birthday presents to find the inside filled with tasty treats! It normally doesn’t take them too long to figure out how to bust in, and once they’ve quickly devoured the inside, then they normally turn their attention to pulling and chewing the boxes to pieces, so this is an activity only provided under the strict supervision of the Keepers to ensure no one starts swallowing the packaging!

Even something as simple as cleaning out a pool, can often be a great source of enrichment for some of our residents. The elephant pools are drained at least once a year and cleaned out. This takes the team a few days, to drain the water, allow the sediment in the bottom to dry out as much as possible, and then with manual labour be scooped out. There’s normally a tyre or two at the bottom that also needs to be pulled out, which we think the eles delight in when they throw them in, knowing they’ll have to watch some poor human servant lug them back out with much difficulty. The pool is then filled with water that is either pumped or trucked in, during the dry season, from the nearby Tonle Bati lake approximately 8kms away. The eles often delight in the clean water for days afterwards. Seen splashing about and throwing their tyres in, to the horror of the Keepers watching on!