Angkor – sorting it out… 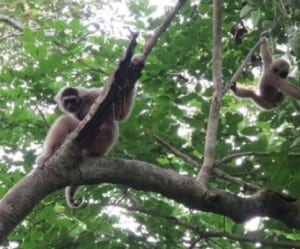 “…quite far from mother…”

Our work to reintroduce wildlife back into the Angkor Temples Forest Complex continues with only a few small problems, despite the change in the senior government official we now have to partner with and his apparent limited interest in our work. Ap-ing, the pileated gibbon born to Bayon and Tevy, the second gibbon pair we released, born June 30th, is now exactly one year old. How time flies! He is precocious and climbs independently, quite far from mother Tevy. Bayon, typical of most male gibbons, is protective of his family and lets us know when we have outstayed our welcome.

Baray, Saranick and their baby, Ping‐peeung, (Spider) are also well. They continue to feed from the food we provide for them twice each day. After they have fed the youngster has a rag around with father and they chase each other through the branches. Mother Saranick watches on until she too is dragged into the game. We feel that Spider is a female and we are making plans to repair the release enclosure we built before bringing a young, unrelated male from Phnom Tamao to pair with the youngster. This will be experimental to some extent, but there seems little choice as wild gibbons have been extirpated from Angkor and we will need to “match‐make” until we have created a more sustainable population of gibbons that can manage their own matrimonial affairs. 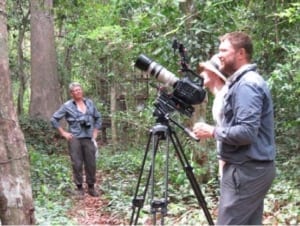 The third pair of gibbons we brought to Angkor in March are also fine. They get on well enough, but there was friction in the release enclosure at feed time, with female Boeung seemingly frightened of male Banteay. I suggested we tie a second feed basket to the outside of the cage, giving Boeung the opportunity of feeding separately and the situation appears to have been resolved.

Well known gibbon expert, Thomas Geissmann, who has contributed to our work, visited with a film crew in April. They were making a film of wildlife in the Mekong Delta and had little luck filming wild gibbons. Thomas took the opportunity to check out our work that he has helped support and also get some good natural footage of the gibbons we have released in Angkor.

The langurs we released often go walk about, but still come to feed at Srah Gondal most days.

Bunthoeun and I have mention to Mr Savath, the Apsara forestry foreman, our thoughts on solving the problems we are having when baby langurs are born. It is customary in langur society for other females to “borrow” infants when they are born. The mother will reclaim her baby at feed time. The “aunt” in Angkor does not return the infants often enough and we have now lost two babies in this way. We feel that if we release more females into the group this will solve the problem and have asked if we can build an enclosure close to the feed site in which to acclimatize them. 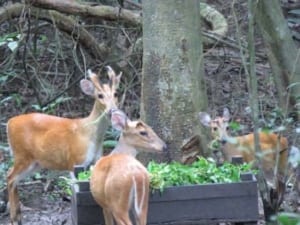 The muntjac deer we have been acclimatizing in an enclosure near Twee‐er K’mouit had a fawn in April. Within a month the youngster was feeding with its parents. His Excellency Hang Peou, the new Apsara official we are working with, has expressed a disinclination to release the muntjac. He will have his reasons, but we know that the domestic dogs that live within the forest will need to be controlled before we release ground‐dwelling animals. This could be difficult and may give rise to some complaint. I have my thoughts on how this can be conducted in a humane manner, but if there is no support from the authorities we will have to make other plans for our muntjac, perhaps taking them down to WRS for release. Small problems continue to crop up in so many directions, which we must solve as they occur if we are to press on with our work. We will not let this worry us. We knew from the start that if it was going to be easy someone else would have sorted it out already!