An Otter’s journey to freedom…

We’ve experienced the full range of emotions on our quest to reintroduce smooth-coated otters (Lutrogale perspicillata) into the forests surrounding the Angkor Temple Complex. They are one of three species of otters in Cambodia, found in a variety of habitats including mangroves, rainforests, grasslands and even human-altered landscapes such as rice paddies. They are listed as Vulnerable by the IUCN with populations declining due to increasing demands for otters in the pet trade and clashes with local fishermen. Like the majority of wildlife in the forests surrounding Angkor, they have been extirpated from the area due to overhunting in the 80’s and 90’s.

In July 2019, a family of five otters were relocated from  Phnom Tamao Wildlife Rescue Centre to a pre-release enclosure in the Angkor Protected Landscape as part of a larger re-wildling initiative conducted in cooperation with APSARA and Forestry Administration (FA) since 2013. What we thought was an otter-proof enclosure was quickly disproven by the new tenants who made short work of escaping within four months of their arrival. Smooth-coated otters are expert diggers, and had managed to create a tunnel underneath the fencing which they used to come and go. Initially there was a bit of panic around their self-facilitated release- had it been sufficient time to acclimatize to their new environment? Would they survive? How would they navigate the challenges of the forest? However, it was decided to allow them to follow their natural instincts, and not to block their exit when they would return to the enclosure for supplementary food. 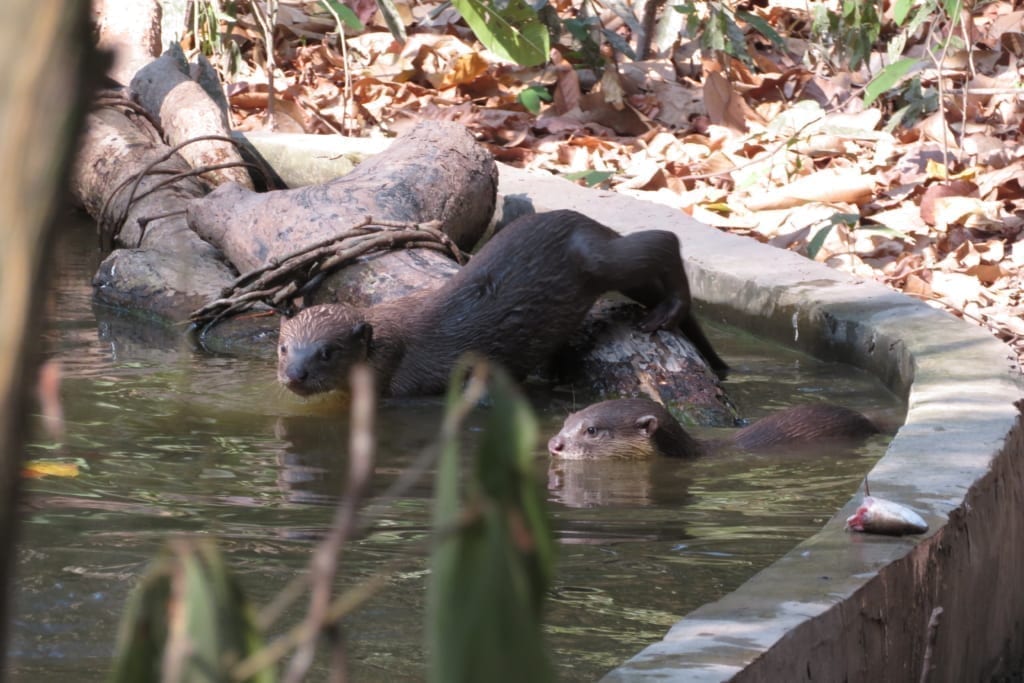 Two smooth-coated otters play in their pre-release enclosure at Angkor.

During their time in captivity, the family were given live fish in their pool to hunt to encourage natural behaviours and ensure their suitability for release, which we continued to provide along with dead fish to support them during their transition. Supplementary feeding acts as a management tool in the early stages of release, allowing us to monitor the animals when they return for the food and enabling us to intervene should problems arise. The family showed good signs of adjustment- being very wary of people (including the Keepers that provided feeding everyday) and even adapting their activity patterns to avoid the busiest times for visitors to Angkor. However, the first tragedy struck after large rains flooded the area in November. These rains brought with them the spawning of thousands of poisonous toads, and the Keepers arrived one day to find two juveniles had died. There did not appear to be any sign of injury which lead us to assume the youngsters did not recognize the danger presented by the seemingly tasty snacks. Not long after this the otters gained some fame after tourists snapped photos of them whilst visiting the Angkor Archeological park. These photos quickly did the rounds on Facebook bringing national attention to the project. Whilst we intended to keep the reintroduction quiet for the otters’ safety, senior CRW staff, Roth Bunthoeun and Nick Marx, were interviewed in conjunction with the APSARA Authority for national TV to bring awareness to the re-wild Angkor program.

Shortly following this, tragedy struck again when the remaining juvenile was not seen with her parents at feeding times. She had disappeared without a trace. We continued to monitor the remaining pair and offer them support- in the form of a safe space to return to and supplementary food. In the beginning of February, the Keepers noticed the pair behaving differently. They had dug a new den, 30m from the pre-release enclosure under a large tree. With the dry season the canals and ponds in the area are drying up, and staff suspected this might be the reason for decreasing sightings of the pair. Our questions were answered on the evening of Saturday February 22nd, when the adults came for their evening feed with a surprise, two pups! Arriving at the enclosure, one of the pups did not use the tunnel the parents had dug under the enclosure fence to originally escape, and ended up getting stuck trying to fit through the fence. The Keeper quickly intervened to ensure the pup did not become injured on the wire and the family continued into the pool for a swim! The pups are already quite old and self-sufficient, following their parents and swimming unassisted.

Like many release programs, this family’s journey has been filled with ups and downs. We hope that with our soft-release protocols; the selection of appropriate candidates, an enclosure for animals to acclimatize to their new surroundings, supplementary feeding, post-release monitoring and a commitment to manage complications should they occur, that we are giving our charges the best chance at a new life in the wild. Whilst the heartbreaks hit the whole team hard, we consider the upsides- two  otters,  rehabilitated, free, and living semi-wild in the forests of Angkor with wild-borne offspring. We’ll continue to offer them support for as long as they need, but at least for now we can celebrate the arrival of their pups as this family continues its journey back in the wild as nature intended.