You call this traditional medicine?

I would like to share with you one of the atrocities that we are involved in as wildlife police in charge of cracking down on international wildlife trafficking cases. I lead an organization called Wildlife Alliance that arrests wildlife smugglers and seizes live animals that are being trafficked to China and Vietnam for “ traditional medicine”. In this case, we arrived too late. The bear was already dead.

On July 18th, after several months of investigation, the officers of Wildlife Alliance anti-wildlife trafficking law enforcement unit arrested a prominent international woman trafficker. Early that morning, the unit received a tip that the woman was passing the border from Thailand into Cambodia with bear parts in her car. The team was notified of the car brand and registration plate but the trader changed cars multiple times making tracking very difficult. On the third car change, the informant was only able to give the car brand (Toyota) and the color of the driver’s shirt (red). But that was enough information for the WRRT to track down the car and, an hour later, the vehicle was identified on the freeway at 70 kilometers from the Thai border. The unit, that was waiting on the side of the road, immediately sped up to chase the vehicle. After a 20 minute mad pursuit, they intercepted the car. 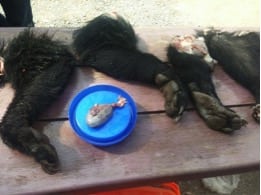 The woman was arrested red-handed with 4 bear paws of a freshly killed Asiatic black bear stored in a large cooler in the trunk and a fresh bear gallbladder in a smaller cooler in her handbag.

WRRT charged the woman for trafficking endangered wildlife, a crime punishable of 5 to 10 years in prison. She was taken to the Bantey Meanchey court where she was interrogated by the prosecutor. She was detained on the same day and stayed in pre-trial detention, waiting for her case to be processed by the court (she is still in jail today and her case has not yet been processed).

Sadly, Asiatic black bears and Malayan sun bears are being brutally targeted by poachers in Southeast Asia for their body parts, which are sold at high price for use in traditional medicine (bear gall bladder and bile are thought to cure male erectile dysfunction) and in high society Chinese restaurants (bear paws are considered a power symbol fit to serve to VIP guests after golf tournaments). Because of this black market trade, bear populations in Southeast Asia are rapidly declining. Cubs are torn from their mothers and sold to cruel bear bile farms in Vietnam and China where they are exploited alive in tiny cages in the dark, their body immobilized in a metal corset and a metal catheter inserted into their livers. Milked daily for their bile, these bears often live up to 10-20 years in abject misery, with heavily infected gall bladders, pain from severe arthritis from not being able to move, and having completely lost their eyesight.

Attached are photos of the bear paws and gall bladder found in the woman’s car.