Preventing a tame gibbon from being released by an Angkor visitor into the territory of the first gibbon pair highlights the importance of proper wildlife release protocols and strong community relationships!

All photos are courtesy of @casadetake

With all of the recent otter and bird releases, it’s been a while since we featured gibbons in an update from the Angkor Wildlife Release Project. My boss, Nick, travels to field sites around the country every week while my work mostly keeps me deskbound in Phnom Penh. But in June I was able to visit the first gibbon pair released in Angkor! So this update is about their family’s story, visiting them with my own family, and why it is important that only appropriate animals are released and that correct protocols are followed.

The first gibbon pair released in Angkor, Baray (male) and Saranick (female), were born in captivity at Phnom Tamao Wildlife Rescue Centre to parents rescued from the illegal trade. Most primates rescued from the pet trade in Cambodia are humanized. Sadly, this means they  cannot be safely released because they lack the skills needed to survive in the wild and they tend to be less fearful of humans, so they may become either overly-friendly or aggressive towards people. However, natural behavior is encouraged at Phnom Tamao by providing large enclosures where gibbons can live in pairs and raise their own young. Thus, unlike their rescued parents who were raised by humans, Baray and Saranick were raised by their own mothers and exhibited behaviors that made them ideal release candidates. They were transferred to Angkor in 2013 and spent 6 months acclimatizing to their new surroundings in an enclosure. When released, they became the first pileated gibbons to enjoy freedom in Angkor’s ancient forests since the species was extirpated from the area due to hunting during Cambodia’s genocide and civil war.

Today, Saranick and Baray still live in the forest surrounding their release site with their two younger offspring, Chung-ruth (which means ‘cricket’ in Khmer) who is almost 5-years old and 2-year old Kontes-long (‘water beetle’). While comfortable with Wildlife Alliance’s animal keepers who they see every day, as you can see from the zoom lens photos below, Baray and Saranick are quite wary of people they don’t know – like my family! This is good because it means they are unlikely to seek out people or become humanized and should stay in the safe area of forest selected for their release site, which is away from heavily visited areas of the Angkor Archeological Park such as Angkor Wat. After the keepers filled their feed basket with rambutan and other fruits, we watched from a respectful distance as each gibbon descended to snatch some fruit and then quickly retreated to higher branches to eat. The pair’s eldest offspring, Ping-Peeung (spider) who is the first gibbon wild-born in Angkor to released parents, has reached adulthood and no longer lives with the family. 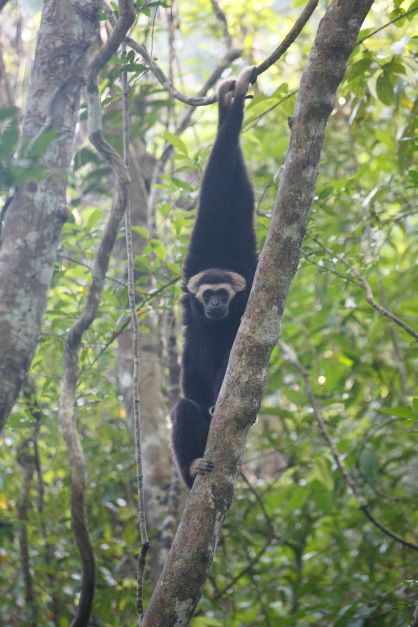 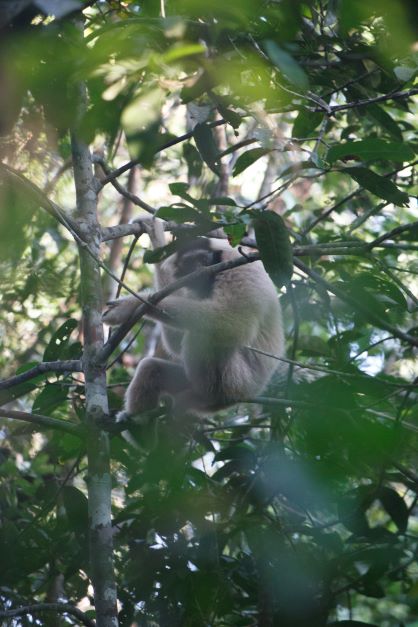 Unlike more social monkey species such as macaques, which live in large groups, pileated gibbons are territorial apes. They tend to live in pairs that defend a sizeable area of about 30 hectares, and grown offspring move away when they reach adulthood. That is why Ping-Peeung, born in 2014, is no longer with their family group. When Ping-Peeung reached 5 years of age, her parents began to chase her away from the family’s feed basket. Now that Chung-ruth is approaching adulthood, our staff have noticed that Baray might be starting to display similar behavior. During our short visit, Baray jumped towards Chung-ruth several times to steal his seat on a branch and/or hug him in what seemed at times playful, but definitely dominant, behavior.

With Ping-peeung, hanging a second basket in another tree resolved the family tensions for a while. But in December 2020 she was finally driven out, left her family’s territory and entered a village nearby. Some local people quickly alerted our keepers that they had found one of our gibbon’s sleeping under the rafters of a house. We captured Ping-Peeung and brought her to a different release site to introduce her to a young male, Bakheng, who had been brought up from Phnom Tamao  (see this blog post for the full story). The two spent about a year bonding together and acclimatizing before they were released. This is a good example of how we carefully plan and execute our releases to give each animal the best chance of survival and intervene to manage them as necessary. 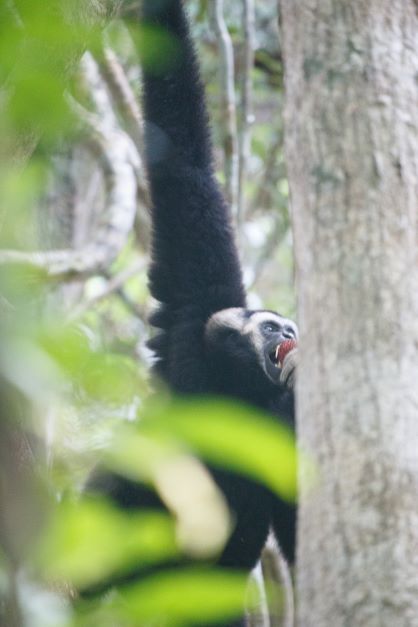 Over the past few years, we have been promoting this project to elevate the importance of wildlife conservation within this world famous cultural heritage site, and the idea of re-wilding Angkor seems to have captured the public’s imagination! After seeing this video a local man who had been looking after many green peafowl and hornbills contacted our staff and offered to donate all of his birds for release in Angkor. This was an excellent opportunity to reintroduce beautiful, large native bird species. As usual, we followed best practices and protocols for wildlife releases recommended by the International Union for Conservation of Nature (IUCN). Following several months of acclimatization, they were soft-released in species-groups (for that story, see this blog post). Post-release supplemental food is offered daily, although only one of the green peafowl still comes regularly to eat it.

However, not all wild animals are suitable for release and it is essential to understand the species’ needs and assess each individual’s condition before releasing any wild animal! Towards the end of May, a visitor showed up at the zipline office, which is within the first gibbon family’s territory, with a tame gibbon that he intended to release. We do not advertise the locations of our release sites, but gibbon calls are quite loud and many local people know there are gibbons in the forest nearby so the man probably thought this would be a good place to release his gibbon as well. While this enthusiasm for reintroducing wildlife to Angkor is what we hope to inspire, it would have been terrible if this well-meaning person had released this adult male gibbon there. As with other gibbons caught up in the wildlife trade, it was humanized and lacked the skills required for life in the wild and Baray surely would have defended his family’s territory against this outsider!

Luckily, we have a good relationship with the zipline staff who alerted us before the gibbon was released. Instead, it was collected by our Wildlife Rapid Rescue Team and taken to Phnom Tamao, where it is receiving the rehabilitation and care it needs. As when Ping-Peeung left her family group and we were immediately able to locate her thanks to information from local people, this experience highlights the importance of excellent community relationships – had the zipline staff not alerted Wildlife Alliance’s keepers, the release might have proceeded, with potentially disastrous consequences! This is also a lesson learned regarding how we publicly communicate about the Angkor Wildlife Release Project and wildlife releases generally. In future, we will include a caveat that not all wild animals are suitable for release!

Your generous donations make it possible for our team to be onsite every day, giving supplemental food and conducting long-term monitoring of our released gibbons and their wild-born offspring. Our keepers’ constant presence and ties to local people within the Park enables us to keep abreast of the many surprises and challenges that arise in this groundbreaking and experimental project. Thank you so much for your support! 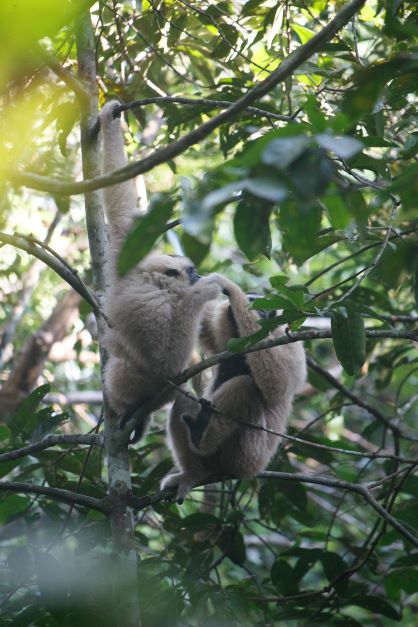