Intervention, a waste of time? 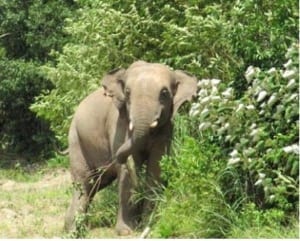 We work hard and we are proud of our achievements, usually feeling we do a pretty good job. Wildlife can be subjected to extreme cruelty, situations are often difficult and dangerous and no‐one shirks what they consider to be their duty. For example so far most would feel that what we have achieved with elephant, Chhouk, has been a resounding success, rescuing him from the forests of Mondulkiri as a tiny calf, with a snared leg, injured so seriously that death seemed a certainty. That was ten years ago, in March 2007. Chhouk has been fitted with a prosthetic shoe and he is a big lad now! Our capture of elephant bull, Sakor, in Koh Kong and subsequent transportation to Phnom Tamao, saving him from probable death at the hands of angry local people was dangerous work successfully conducted, resulting in no injury to either elephant or captors. Jamran, the first elephant we captured near Sihanoukville in 2003, was very similar.

But sometimes one wonders…. 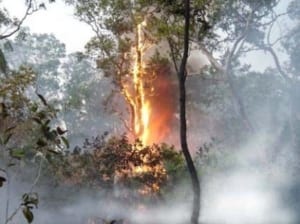 Cambodia retains only remnants of its once magnificent wild fauna. Forests are becoming more and more fragmented and the once abundant wildlife within is being harassed to extinction. Forests are logged or burned, wild animals are hunted and people set up chamkas. Large wild animals flee in an attempt to seek sanctuary elsewhere. Government officials and Ministers have frequently requested us to assist local people and the wild animals involved when injury or damage has occurred in such situations. Species we have rescued include elephants, sambar, serow, gaur, muntjac and many other smaller animals that have fled their diminishing forests in search of safety. Despite laws passed by the Cambodian Government recently protecting forests and their wildlife, in practice there is little implementation of these laws. Hunting is rife, inroads continue to be made into shrinking forests, wild animals come into conflict with people and they are subsequently killed or “rescued” – taken into captivity. If this situation remains the same there would seem to be no hope for what little remains of Cambodian wildlife outside of the zoo.

Conservation organizations estimate that there are now only around 300 wild elephants in Cambodia. This number might be optimistic. We have now removed 6 elephants of varying ages from this equation, usually at the request of the Cambodian Government. The animals were “rescued” indicating they were taken from the forest either for their own safety – some were persistent crop raiders – or because they were alone and too young to fend for themselves. All are now in captivity. Shrinking forests and human encroachment or hunting pressures are the reasons this was necessary. Unless these problems are addressed by ensuring greater protection of of forests and their wildlife, human/elephant conflicts will continue and increase for as long as Cambodia can hold on to populations of these great animals. 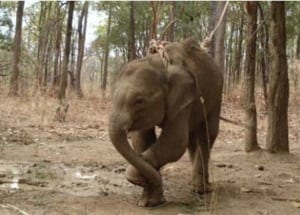 Despite repeated requests the government fails to take the issue of snares seriously with little or no patrols conducted outside of areas that do not have NGO involvement. Penalties for hunters setting snares will not be enforced by the courts unless animals have been captured already. This method of hunting is cruel and unselective, causing injury and death to males and females with young, common and endangered species alike. Snares often go unchecked and animals will be left to die a lingering death of thirst and starvation. Those that escape the snare or are rescued will certainly lose the limb and probably also their lives, with the constriction of blood flow, even for only a short period of time, causing serious infection. 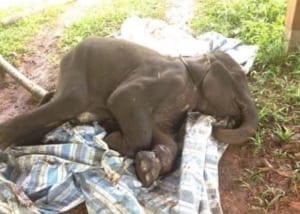 “…died before our arrival.”

Last year we were called by Elephant Valley Project to assist with a small elephant calf in Keo Seima, Mondulkiri province, who was found wandering alone in the forest, a snare tight around his front leg. I left with Bunthoeun, vet Chenda and Forestry Administration vet, Nhim Thy. The calf could clearly no longer survive in the wild, but perhaps we could save his life. The little chap died before our arrival, his leg so seriously infected. 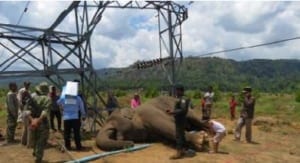 I was leaving WRS with Bunthoeun in February this year when we were called and asked to check out an elephant that had been electrocuted near Pich Nil, along National Road 4, not far from the turn off to Koh Kong. Road 4 divides National Parks Kirirom and Bokor and the forest has been cleared along each side of the road, leaving no corridor between the two parks. Now and again small groups of elephants worry local residents. We turned off and found the dead elephant, a bull clearly in musth, lying beside the electricity pylon he had pushed down. The pylon was extremely feebly constructed and the elephant had obviously touched one of the cables as it fell. A great shame. We buried him at Phnom Tamao two days later. Elephants are greatly respected here, if not conserved as well as they might be and the burial was accompanied by a ceremony administered by Buddhist monks.

More recently in March 2017 we were again called to help capture a domestic elephant bull in Mondulkiri, who had come into musth, killed his owner and gone on a rampage in and around local villages. When we arrived police had already shot him and his single tusk had been removed.

With all this in mind one sometimes feels that there must be an easier way. Amongst other factors the emotional expenditure is great. Unless there is a last minute flash of light all the wildlife that cannot live comfortably in the proximity of man – animals that mankind can use or will tolerate – is doomed. Perhaps it might be wiser and easier to get on with other things and allow circumstances and the inevitable to take their course….. 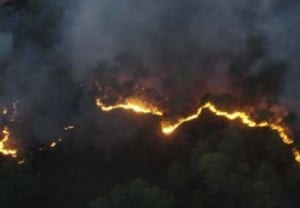 “…consuming everything in its path…”

Then we remember a short story, which some of you may have heard before: A huge fire erupted in the forest. The blaze was fierce, consuming everything in its path. Flames leapt through the undergrowth, racing across the ground. Trees were set ablaze and fell to the floor. The heat was intense. The animals were fleeing lest they perish, all except the little sunbird. She hurried immediately to the nearest river and scooped up a tiny beakful of water, then flew into the thick of the flames and dropped her load. She went back to the river, collected another minute mouthful, beat her tiny wings and once again returned to the fire. This continued, the tiny sunbird working tirelessly in her attempt to halt the flames and put out the fire. The other animals saw what she was doing, but raced past, saying nothing. They did not stop to help. Then the mighty elephant, bringing up the rear, came by. Irritated at what he considered to be the futility of the little bird’s actions, he bellowed his derision. “You stupid little bird,” he roared. “If I cannot douse the flames what hope have you got? You would do better to save yourself! What on earth do you think you are doing?” The tiny sunbird paused in her duties for a second, hovered in front of the mighty animal and looking up at him, said quietly, “I am doing what I can.”

We are the foot soldiers taking it to the next generation. We will win some battles and lose some, but we will only lose the war if we give up…. and we must never do that.

Our moment of weakness vanishes. There is work to be done….