The Wildlife Rapid Rescue Team (WRRT) was extremely successful in the second quarter of 2017, doubling the number of live animals rescued and released and doubling the amount of wildlife meat confiscated from the first quarter of the year. Since its development in 2001, the WRRT has intercepted up to 75% of illegal wildlife trade in Cambodia. These operations have amassed to the rescue of around 70,000 live animals and the confiscation of over 30 tons of wildlife products. The team is tirelessly working to protect animals from becoming pets, trophies, clothing, and medicine. Traders are now aware that imprisonment and hefty fines are likely consequences of their illegal profession and that they should seriously reconsider their actions, especially if they plan on exploiting endangered species, as the trading of endangered animals results in the maximum fine and possible imprisonment.

The WRRT does not only focus on the first stages of wildlife trade, but infiltrates every party on the supply chain, from poachers to buyers. In June, the WRRT was informed of suspected wildlife meat being stored in a cooler outside of a restaurant. While there was little wildlife meat for sale in the restaurant, the WRRT continued to search around the neighboring land for anything incriminating. This determined search led to the discovery of two black bear legs. With the declining population of Asiatic black bears and their official classification as Endangered, the WRRT imposed the maximum fine of $17,750 and advocated for a prison sentence for the restaurant owner. 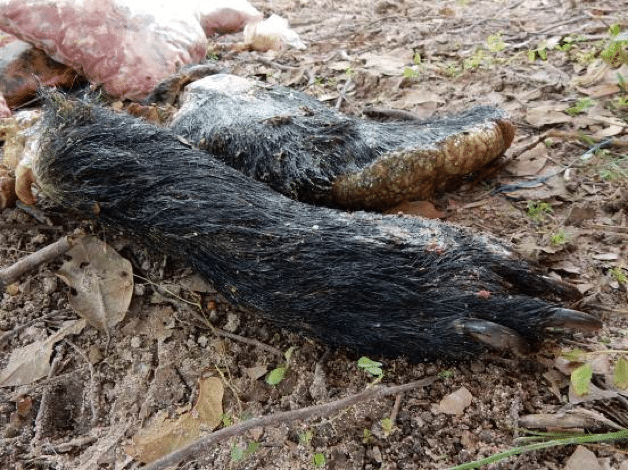 Another successful operation that stemmed from the help of an informant took place at a trader’s home located between Kratie and Stung Treng. After receiving a tip of a possible location of illegal activity, the WRRT raided the suspect’s house and caught him in the act of cutting up wildlife meat to add to his 150 kg collection of wild pig, sambar, muntjac, and monitor lizard meat. The trader was arrested and fined $1,764. These two cases are examples of the many operations the WRRT executed in recent months that owe their success to the Wildlife Alliance Wildlife Hotline. The hotline allows civilians and WRRT informants to report suspicious activities that otherwise probably would not have come to light.

Please help the WRRT to continue to disrupt the illegal wildlife trade and to rescue thousands of more animals by donating to “End Wildlife Trafficking.”