For those that have not seen my previous posts, my name is Monster – just like Frankenstein’s monster -not a scary one! I will be reporting to you twice a month about the activities at the Phnom Tamao Wildlife Rescue Center Nursery!

I am a northern pig-tailed macaque and was actually born at Phnom Tamao, but shortly after I was born my father attacked me. He caused injuries to my arms, legs and head including irreparably damaging my left eye, my carers were unsure that I would survive. Mr. Ran didn’t give up on me and continued to get me to drink a little milk every 2 hours and with patience and daily medication from the vets I grew stronger day by day. My wounds healed up and although I have lost an eye and can be a bit clumsy, I am very happy living with the other juvenile macaques who are being rehabilitated. In this young troupe, I am second to the alpha male and teach the others skills as I am now over 5 years old!

We have a super cute announcement this week so I’ll get straight on with that! You may have seen it already on the lens picture update. Unfortunately, our breeding pair of binturongs seemed to be neglecting their kitten, this has happened on occasion before and resulted in the kitten passing away so the keepers didn’t want to take the risk this time and made the hard decision to remove it from the parents. It does mean that it will be too habituated to be released in the future, but it can still make a difference by being in our breeding program. At the moment it is being taken care of in our nursery and provides a unique experience for guests on the tour. Many people haven’t ever seen a binturong let alone a binturong kitten! 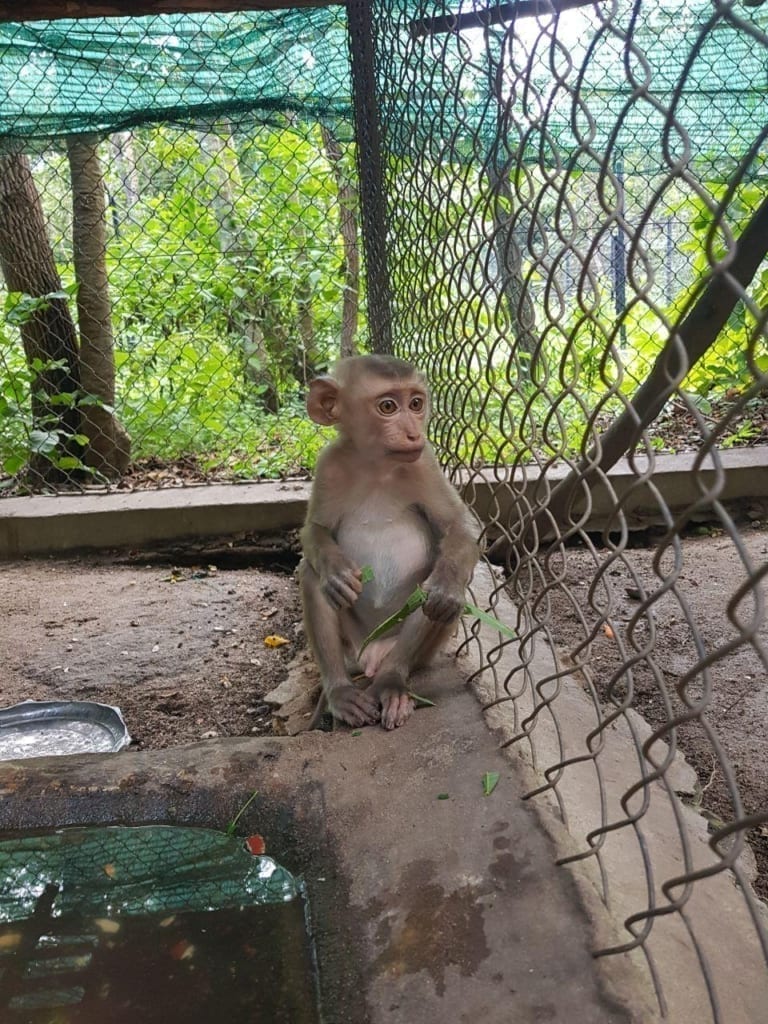 The 3 infant macaques are still doing well, very cautious of any visitors that are not the keepers which is good news for their future. Hopefully when they join my group they can be a bit more confident with myself and the older macaques! They are still interested in anything novel that is added to their enclosure. 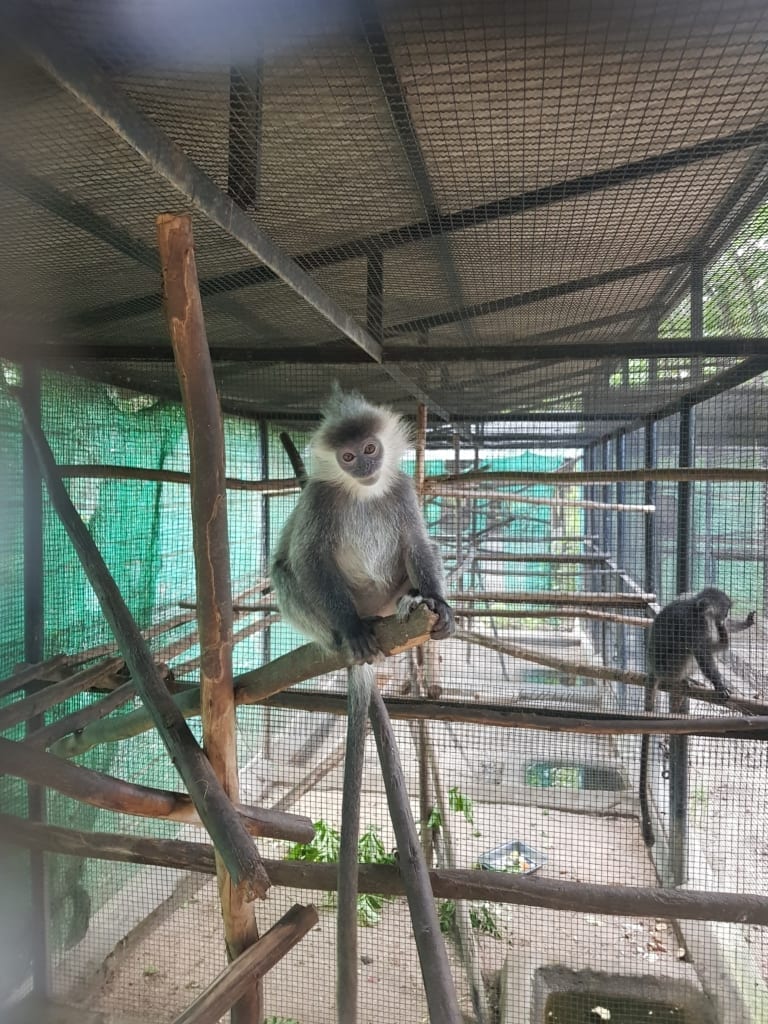 Sad news about one of the infant silvered langurs, it was very weak when it arrived and unfortunately passed away. When humans try to keep silvered langurs as pets, they get fed lots of fruit instead of leaves and this makes them very sick. The other two are still doing well however and are very vocal when they are waiting for milk! The older silvered langurs are getting on very well, being very curious.

The gibbon is getting stronger every day, also very vocal when it is waiting for milk. There is usually lots of adorable cries at around 2pm when the keepers feed everyone their milk!

Not much change with the civet, it is still sleeping all day and is active at night time. The keepers feed it a mix of fruits and raw chicken, hopefully it will grow big and strong!

The young swamp hen is very nervous of any visitors near it’s enclosure, hence why we haven’t had any photos recently. When it is released the keepers hope that this aversive behavior will help it avoid being recaptured. 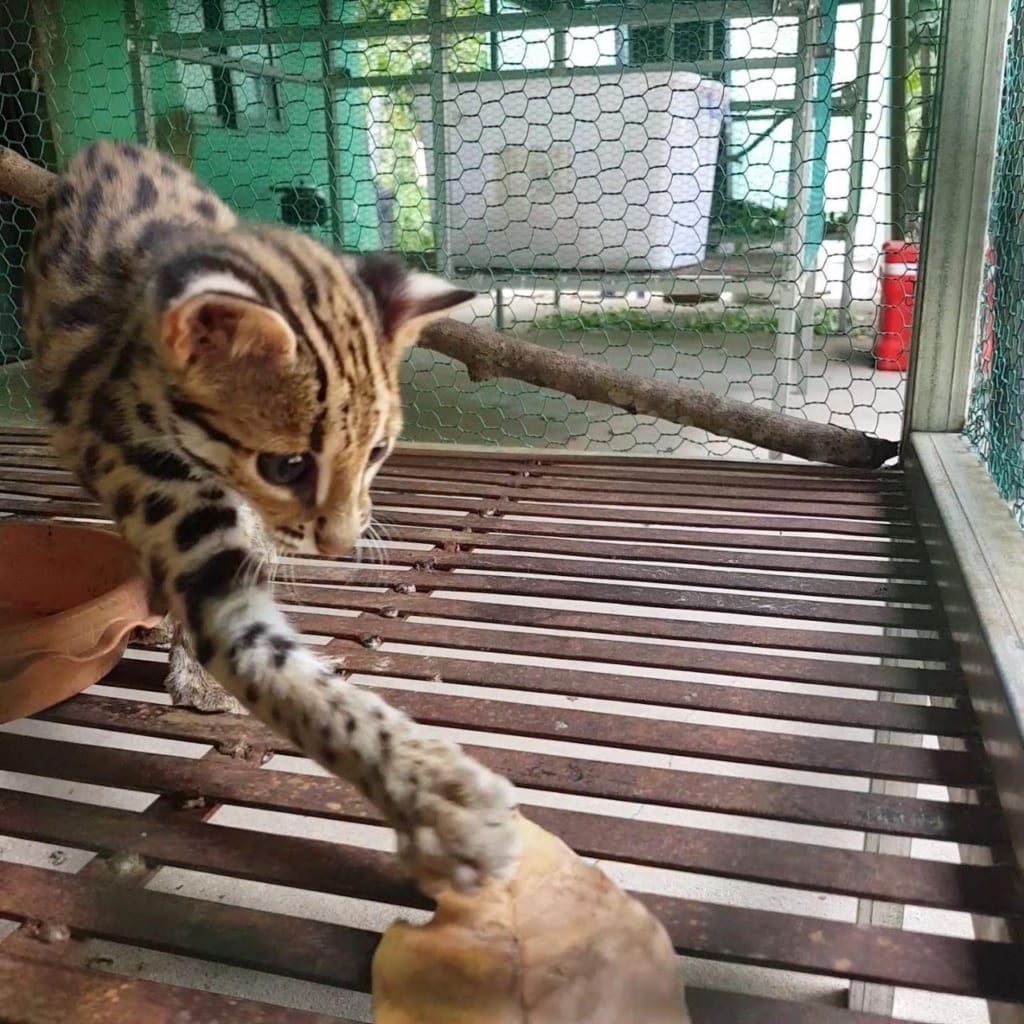 The leopard cat kitten is doing well and, naturally for most cat species, sleeps a lot! He really enjoys practicing stalking behavior when the tour team give him a leaf to attack! See the picture for an action shot! 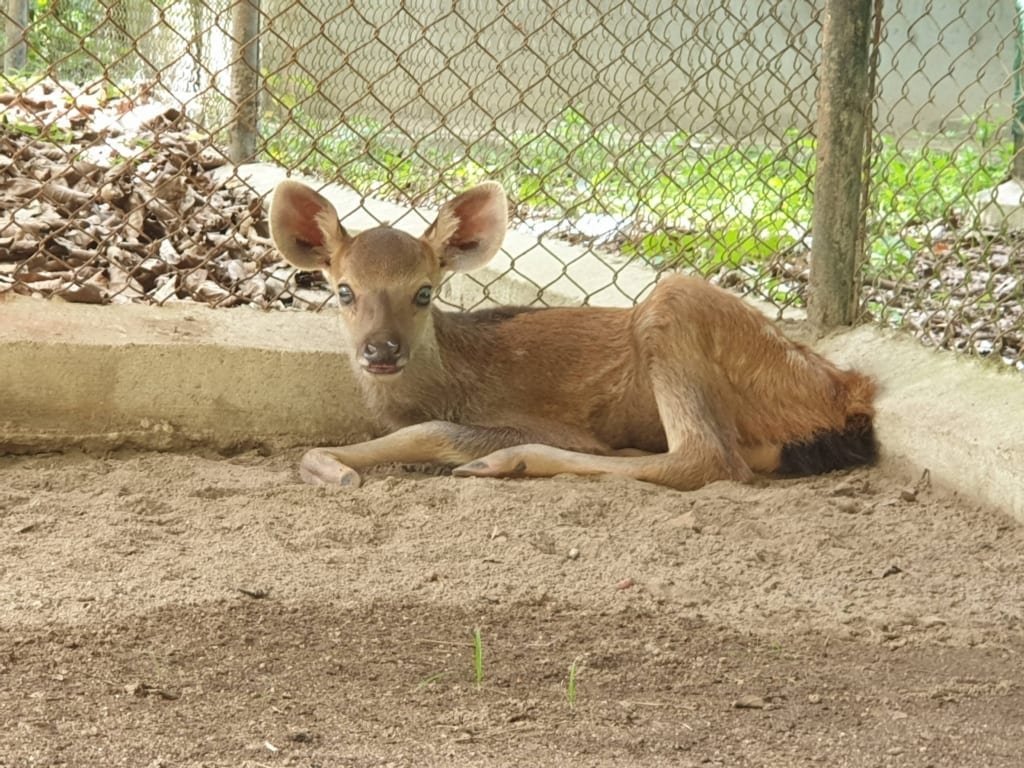 Remember the muntjac fawn that I told you about previously? He now lives permanently in a larger enclosure where the grass has grown from all the rain making it very difficult to see him! He has a new enclosure mate in his old enclosure though. A rescued sambar fawn, check out those legs and ears!

Over with our elephant keepers the 3 older infant douc langurs are enjoying being able to play with each other. The keepers noticed that third one that was rescued named ‘Ucee’, had a small amount of diarrhea, she was removed for a few days while it cleared up and is now reunited with the others for play time! The most recently rescued named ‘Udee’ is still a bit too young to join in for play time, so for the moment watches from an adjacent enclosure. She is very nervous of new people.

In my enclosure the new pig-tailed macaque has settled right in with the group as second in charge. The tour team added a new platform for us to play on last week, we love anything new to investigate!