Named for its uniquely spotted coat, the clouded leopard is a reclusive Asian cat that is rarely seen in the wild. While little is still known about their behavior in the wild, they are extremely skilled climbers that can hunt in trees and on the ground. 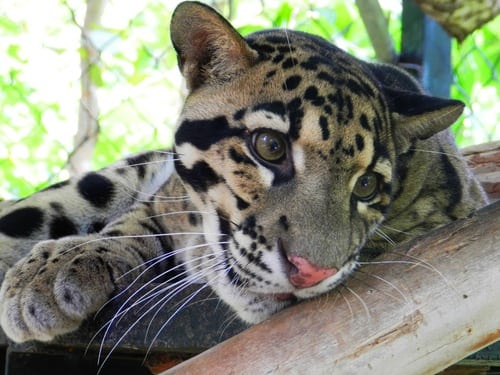 In 2006, a pair of clouded leopards were donated to us by Howlett’s Wild Animal Park in England. Although these cats are particularly difficult to breed in captivity, we had our first success in 2010 when they became the proud parents of our beautiful male Popork.

In 2011, a potential new breeding partner for Popork was generously donated by Howlett’s. Thankfully, they get on well, though they are yet to have any cubs of their own for our release program! While Popork is wary of strangers and will often hide, he knows our staff well and responds to their calls with happy greetings of his own!

3 Ways You Can Help Clouded Leopards