The Sunda pangolin is a scaly mammal that eats ants and termites, hides in dense forest, and rolls into a tiny ball when scared. However, this secretive and solitary animal is also the most illegally traded mammal in the world. Hunted for their meat and scales, more than one million individuals are believed to have been trafficked in the past decade. 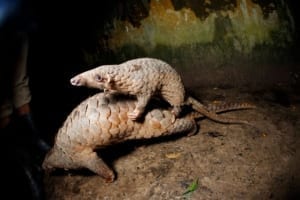 Roux was born at the Wildlife Release Station on September 13 2018. She is the fourth offspring to Lucy, who lost two limbs to snares before arrival at WRS and so became the mother of our captive-breeding program for pangolins. Lucy was partnered with a male, named ‘Thom’ – Khmer for ‘large’ as he was the largest pangolin received at WRS. Thom had escaped a traders bag in Phnom Penh and wandered into a restaurant, whose owner called our Wildlife Crime Hotline to collect him – a lucky break as pangolins are mainly sought for delicacies! On arrival we put Thom in an adjacent enclosure to Lucy to slowly introduce the pair, however Thom had other ideas and ripped through the wire enclosure in the night, the keepers finding him in Lucy’s sleeping den the next morning.

Roux spent the first year sharing an enclosure with her parents, riding on both her mother and father’s tail for transport. The three were inseparable, sleeping in the same termite mounds or logs provided in their enclosure. She is not shy around humans, quickly coming over to the keepers when they enter the enclosure in the evenings to provide her evening meal of red ants. Roux has now been placed in an enclosure on her own, it is too early to determine if she will be set for release or if she will be the founder of a new captive-breeding program with an unrelated male.

The Most Trafficked Mammal in the World

When pangolins are scared, they curl-up into tiny balls and use their scales as armor. Unfortunately, this self-defense mechanism does not protect them from their biggest threat – poachers. The illegal trade in pangolins has reached epic proportions, and these once common animals are now classified as Critically Endangered. In China and Vietnam, their meat is considered a delicacy and is sold for $350 per kg; their scales are used in traditional medicine, and can be worth up to $1,000 per kg.

It is estimated that 10,000 pangolins are trafficked each year, and Wildlife Alliance’s Wildlife Rapid Rescue Team is determined to put an end to this devastating trade before it is too late. By tracking down poachers, raiding restaurants, markets, and stores, and investigating trafficking networks, the WRRT is the last line of defense for these helpless animals once they have been removed from the forest. The team also provides education to hunters, middlemen and dealers on the current laws put in place to ensure lasting change.

3 Ways You Can Help Pangolins