The great hornbill is one of the largest members of the hornbill family. They can weigh up to 7 pounds and reach up to 3.5 feet in length. Their unique casques are thought to help amplify their loud calls. Found in South and Southeast Asia, they primarily feed on fruit and help in rainforest seed dispersal. 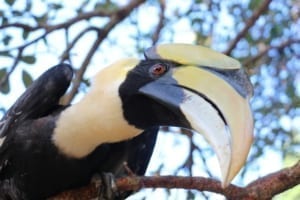 Joa (meaning ‘sap’ or ‘resin’) was rescued as a chick by the Wildlife Rapid Rescue Team in 2016 from a market outside of the Phnom Penh airport and transported to the nursery at Phnom Tamao Wildlife Rescue Center. The dedicated nursery staff cared for him as he grew into a young fledgling. However, it soon bacame apparent that the hot climate in the dry dipterocarp forest of Phnom Tamao was not the most suitable habitat for him and he was quickly transferred to the Wildlife Release Station in the Cardamom Mountains! The keepers at the Station allowed him to move freely around camp, only locking him into an enclosure overnight to protect him from resident predators. He would follow the keepers about their daily tasks, hopping about the camp as he had not yet developed flight feathers! Now, he has grown into a handsome hornbill, able to fly where he pleases in the surrounding forest though his curiosity (and the free food) keeps him to his old ways and he is often found investigating the staff’s activities around camp!

3 Ways You Can Help Great Hornbills