With approximately only 35,000 individuals left in the wild, gibbon populations are on sharp decline due to hunting and habitat fragmentation. They are famous for the incredible calls that resonate through the forest. They vocalize in defense of their territory; however hunters often use these calls to pinpoint their location and capture them. 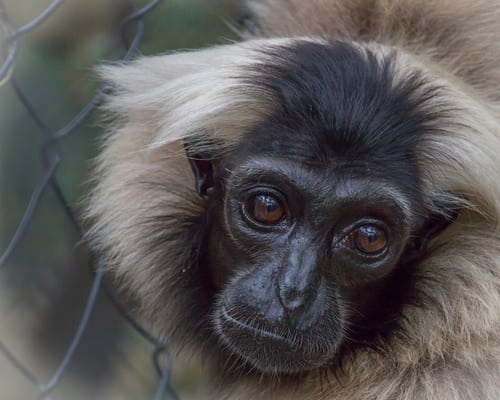 Preah was already living at Phnom Tamao when Wildlife Alliance joined in 2001. She has missing fur on one of her legs and marks around her neck that were mostly likely caused by a rope, and we suspect that she was likely kept as a pet before arriving at the Rescue Center. While wary of visitors, she is very trusting with our staff and loves affection, often presenting her back, head or feet for a grooming session and massage. Taken from the wild at a young age and raised by humans, sadly Preah cannot be paired with a male gibbon or released, instead she has a safe home at Phnom Tamao.

The reintroduction of gibbons is an exciting and vital step towards the conservation of this endangered species. Born to parents rescued from the illegal wildlife trade, a gibbon pair that was mother-raised at Phnom Tamao Wildlife Rescue Center (PTWRC) and had been living in a rehabilitation enclosure with limited human presence for some time, was released on Wednesday, December 12th, 2013, in Angkor Archaeological Park.
They were transferred to their release enclosure in Angkor Thom, where our wildlife rehabilitation staff monitored them as they acclimated to their new surroundings. The bonded pair has adjusted well and even duetted together. Baray, the male is active and playful with his partner, Saranik, who is much more reserved. Both animals are wary of people, which is good in an environment where tourists and other people are ever-present.Guards have been stationed to safeguard the forest, and the pair will continue to be monitored to ensure they thrive in their new home. Help Wildlife Alliance continue to be at the forefront of conservation and wildlife protection in the Southeast Asian tropical belt, by making a donation to the Angkor Release Project.

Donate to the Angkor Release Project

4 Ways You Can Help Pileated Gibbons