The reclusive sun bear, the smallest member of the bear family, is named after the golden patch of fur on their chest, which legend says represents the rising sun. Their stout stature suits their arboreal lifestyle and their long claws allow them to rip open trees and termite mounds. They also have a comically long tongue, perfect for extracting honey from beehives. Unfortunately, sun bears are heavily hunted by commercial poachers for their body parts, such as gall bladders and paws. Their homelands are being lost rapidly to deforestation, causing their populations to drastically shrink. 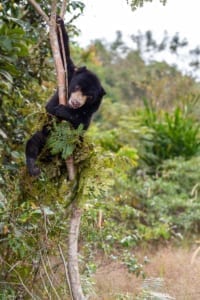 In June of 2018 we received a young Sun Bear cub from Stung Treng province after he was donated to another NGO Birdlife International by a villager. Given he was only approximately 4 months old and hoping for the best chance at release we immediately transferred Micah to our Wildlife Release Station in the Cardamom Mountains. Still requiring milk formula when he arrived the staff have started introducing him to solids, taking daily walks in the forest with the Keepers where he is learnt to climb trees, build nests and forage for termites and ants to eat! He now shares the 1-hectare open-top enclosure with our adult female sun bear Sopheap, who we hope will become his surrogate mother!

3 Ways You Can Help Sun Bears