On Tuesday afternoon, a forest protection ranger, a military police officer and conservation worker of WCS were killed as they were doing a routine patrol in north-eastern Cambodia. The attack is thought to have been out of retaliation for their seizure of illegal logging equipment from armed government forces who backed the illegal logging trade. 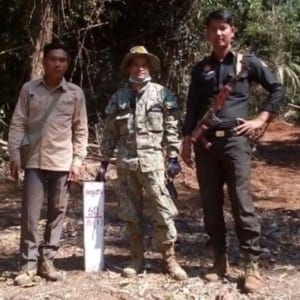 The death of these three men, is just the latest in an increasing and alarming trend, the murder of those defending the environment by parties seeking financial gain from the exploitation of natural resources. In just the past two years, around 200 environmental defenders have been killed, according to the UK group Global Witness.

Cambodia’s rangers risk their lives every day as they venture into the forest, protecting it from loggers and hunters. It is a difficult and dangerous job but is vital to keep the forest standing.

The three brave souls, Thol Kna, Tern Soknai and Seng Vattana, were highly-dedicated rangers and will forever be remembered as heroes of the forest. We send our sincerest condolences to their families, friends and colleagues.