On Friday 22 January at 4:30pm, a patrol team in the Cardamom rainforest found a live Sun Bear trapped in a snare.

The patrol team, which is made up of rangers from the Ministry of Environment, the Royal Gendarmerie of Cambodia and Wildlife Alliance, found the bear while on patrol in the forest. 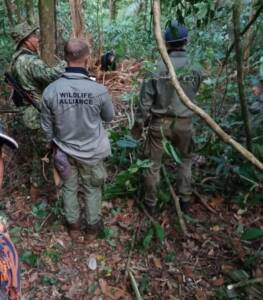 “We found and removed hundreds of snares from the forest floor,” said patrol team supervisor Taras Dashkevych. “This led us to the sun bear.”

They immediately called for assistance from the Wildlife Alliance Wildlife Rapid Rescue Team (WRRT), which is led by Nick Marx. Within one hour, he and the WRRT team, including wildlife veterinarian Chenda were on the road from Phnom Penh to the Cardamoms. They arrived at the site at 5:00am.

When Marx saw the bear he felt relieved – but anxious. “The bear seemed well and strong.”  But Marx and the team didn’t know how serious the injury from the snare was yet. 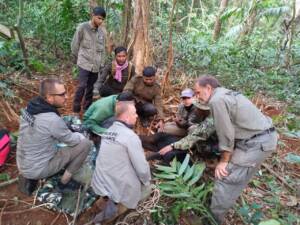 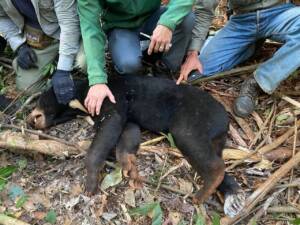 Veterinarian Chenda sedated the bear so he could examine it. They discovered that it was a male.  One of his back paws was trapped in the snare. “Only three or four inches of the paw had been trapped,” Marx explained. After removing the snare, they found that the injury was not serious. “He was remarkably uninjured.” 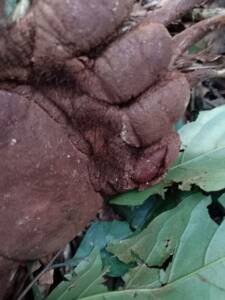 Chenda cleaned the wound and administered antibiotics to reduce the risk of infection. He and Marx agreed that there was no need to take the bear into captivity at Phnom Tamao Wildlife Rescue Centre. “We knew that the best thing to do was to release him immediately,” said Marx.

So the team withdrew from the area. Shortly afterwards, the bear woke up from the sedative and walked back into the forest.

This bear was lucky. The rangers found it in time to prevent serious injury or even death. And for the WRRT team, the release was a first.

“This was the first time that we were able to treat a live sun bear in a snare,” said Marx  “and release it back into the forest right away.”

For Marx, the experience is a reminder of the deadly threat of snares. Poachers set hundreds of snares in the forest at a time, and they can trap any animal, making snares a threat to all wildlife, including Sunbears. The species is classified as endangered according to the Prakas on Classification and List of Wildlife Species (Prakas No 020 PK.MAFF).

Sun bears were formerly widespread in the lowland forests of Southeast Asia but their numbers have declined due to threats which include habitat loss and commercial hunting, which is often conducted with snares.

“On a single patrol, rangers removed over 400 snares,” said Marx. “They are causing the extinction of our wildlife.”