A Ministry of Environment – Wildlife Alliance ranger stands behind a burning pile of bushmeat seized from restaurants during raids in Koh Kong province.

Worrying though the current crisis is as to how we contain COVID-19, of equal concern must be how we prevent the next zoonotic virus, which will probably be worse. We do not seem to learn, but must hope that this crisis has a silver lining and serves as a portent that humanity’s ceaseless exploitation of the Earth is not only unsustainable, but also destructive, ultimately to our own species if we do not change our ways. Other warnings we have recently received involving different diseases have fallen on deaf ears. We are being ‘told’ and the voices will become louder and more strident the longer we refuse to listen.

The differences of opinion concerning how COVID-19 was unleashed on the World are unhelpful and in some cases childish. The first suspicions, and what is generally understood, is that it was originally transmitted through the slaughter and consumption of pangolins or bats from what is euphemistically called a ‘wet market’ in Wuhan, China. This is how we term a place in which all manner of cruelty is inflicted on animals, wild and domestic, in complete contradiction to what we think of as civilized or humane behavior. This criticism is not aimed at Chinese Englishmen or Chinese Americans, nor even the majority of Chinese people in China. It is a truthful account of what takes place in many cities in China, among other countries, and in one Chinese city in particular, most eloquently discussed by Bill Maher.

The consumption of wild animals in China is not a practice that, as a norm, is conducted by poor people nowadays. As in many Asian countries, this is chiefly for the more affluent members of the population, a minority who have sufficient money and can afford to eat their way through our remaining wild animals. Pangolins will not find their way on to the dinner plates of poor local hunters. They will be transported long distances, fetching high prices from the wealthy in cities, often in China. The statement that wildlife is the staple of millions in developing countries is also not particularly true. No conservationist will have a problem with a poor local man catching a wild pig or a deer to feed his hungry family. This is sustainable and is not what causes the problem. In Asia viruses have arisen as a result of millions of wild animals being hunted and transported long distances via middle men, to markets in cities, often in faraway countries, for consumption by more affluent members of society.

The current pandemic has caused huge damage within human society throughout the World. The repercussions of this will be profound and will last long after we ultimately manage a measure of control over the disease. The knock on effects of COVID-19 will continue for years. Other diseases that are suspected to have emerged from our unsavory treatment of wild animals including, but not solely, HIV and Ebola (consumption of chimpanzees), MERS (camels), and SARS (civets), have caused varying amounts of suffering and mortality to our own species. Avian Influenza, if not actually ‘invented’ by humans, has certainly infected poultry and other species throughout the World thanks to the actions of our own kind, mutations of which have caused many recent human deaths, for example H1N1 in 2009. It seems these warnings have not been sufficiently clear, so the lessons continue.

My question is this: Are we, the majority of the World’s population, happy to suffer these dire consequences, resulting from the actions of an ignorant and selfish few? Most people will never see a pangolin, let alone eat one. It also seems likely that most would prefer not to eat a bat. Pangolins are said to be the most heavily trafficked animal in the World. Most, but by no means all, will end up in meat markets in China. These animals will have been taken from their forests by hunters and sold to traders, whose business is to exploit natural resources in whatever way they can for their own financial gain, resulting in the current problems we are all experiencing today.

The conservation of our Natural World must be woven into our World-view and into the policies and laws of all governments, not merely act as a vote catcher, a token towards those of us who happen to be fond of nature and wildlife. It should be in realization that, despite our inventions, our hypocrisy and our conceit, this is all we have. ‘Nature’ is the very fabric of our existence. We are being told and the warnings will get louder and more painful until we are beaten into submission and see fit to listen…or maybe get replaced by a wiser species.

COVID-19 was always going to happen in some form or other and comes as a result of the behavior of man. It is unnecessary and it will happen again unless we change our ways. We inflict all manner of abuse and cruelty upon the Natural World, upon each other and upon our fellow creatures. Whether this is a warning from above or the consequence of our own actions is immaterial. COVID-19 is not a natural disaster, a tsunami, or a coincidence. It is of our own making and it is up to us whether we learn, or whether it is back to ‘business as usual’ once it is over, only to re-occur again in some other more violent form.

We are luckier than some. Our Future is in our own hands…

I leave you with the words of a lesser known poet, which may prove appropriate considering our current circumstances:

“My Child you know I love you. You mean all the World to me.

I’ve given everything to you. I hope that this you see.

Always I’ve stood by you, doing all the things I could,

With all of it so freely, just as any Mother should.

You know that I’ve provided everything I could afford.

I’ve asked for nothing in return – your presence my reward.

Always I have sheltered you, ensured there’s food to eat,

The water from my streams you’ve drunk I hope was always sweet.

And throughout the coldest winters it was I that kept you warm.”

“To respect another’s judgment can often be a little hard

And I know you hold my values in such very low regard.

You challenge ancient wisdoms taught by sages long ago,

You travel many paths you know it isn’t wise to go.

You hurt so many others that I love as much as you.

These battered toys you play with I’m unable to renew.

Gone far beyond the boundary any common sense allows.

I’ve been so very worried that you never seemed to learn,

But always I had hoped to see my Prodigal return.”

“I’ve tried so hard to care for you, your debts I’ve always paid,

Smiled down on you benignly when I’ve seen your wasteful ways.

I’ve forgiven your ingratitude, and all the harm you’ve done,

As any loving Mother would forgive her wayward son.

I’m so sorry that I’ve failed you, couldn’t make you understand

That you could go beyond the limit I was able to withstand.

Please forgive me now my little one, to whom I’ve given life.

I can no longer help you and this stabs me like a knife.”

Mother Earth was softly sobbing now. She knew what lay in store,

But she was barren and exhausted, and she could give no more. 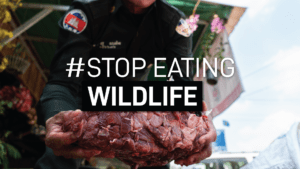 Wildlife Alliance is acting as the first line of defense to future pandemics by fighting the illegal wildlife trade across the entire supply chain. Support our Wildlife Rapid Rescue Team, Asia’s only full-time mobile wildlife police unit, and our rangers protecting one of Asia’s last great rainforests through our #StopEatingWildlife campaign.