Hunters of Endangered Banteng Caught in the Night

Just outside the Southern Cardamom National Park there is a patch of forest that supports a population of banteng. Unfortunately, the fragmented forest is surrounded by cleared land and the nearest protected forest area is ~21 km away, a far distance for the dense forest dwelling animals to traverse. With the Endangered cattle restricted to the forest fragment, people from the local village took it upon themselves to protect the animals. They actively patrolled the forest, using their own resources, to protect the banteng.

Nick Marx and his team had visited the area multiple times in the last few weeks trying to assess the situation of the vulnerable population. A few banteng have snare injuries on their legs and while these don’t cause immediate death, snare injuries often become severely infected and lead to a slow and painful death. This isolated banteng population is at risk and Wildlife Alliance has been working to assess the best course of action to protect them.

When the call came last night, the rangers from Chambak Station immediately went out to the forest fragment to try and stop the hunters. The rangers apprehended one of the hunters who was transporting body parts (120kg) of a banteng. Wildlife Alliance will work with the government to fine and jail the hunters for killing an Endangered species. We would also like to applaud the effort and dedication of the people of the nearby village for protecting these rare animals. 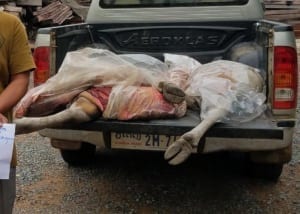