Rangers stand by a destroyed safrole oil factory after a raid in 2009.

It’s 2009 and Wildlife Alliance rangers are patrolling deep in the Cardamom Mountains rainforest to destroy enough of the key ingredient in ecstasy to disrupt supplies to the UK illegal drug market. At one stage, Cambodia’s famous Cardamom Mountains were at the epicenter of global ecstasy production. Despite this, it didn’t take long before a series of major crackdowns led to the war on ecstasy in the Cardamoms being over.

The source of the key ingredient is a rare tree scattered throughout the Cardamom Mountains, known as Mreah Prew in Khmer. Grinding down and boiling the roots of the tree leaves you with the highly sought after key ingredient, safrole oil.

In 1999, neighbouring Vietnam outlawed safrole oil production and, in 2004, China decided to take a stronger stance on controlling its production, shifting the attention to Cambodia as a source country. By the early 2000s, criminal networks were capitalizing on the rare tree, with jungle laboratories scattered throughout the rainforest, desperately trying to meet global demand after the illegal drug had shot up in popularity in Europe. 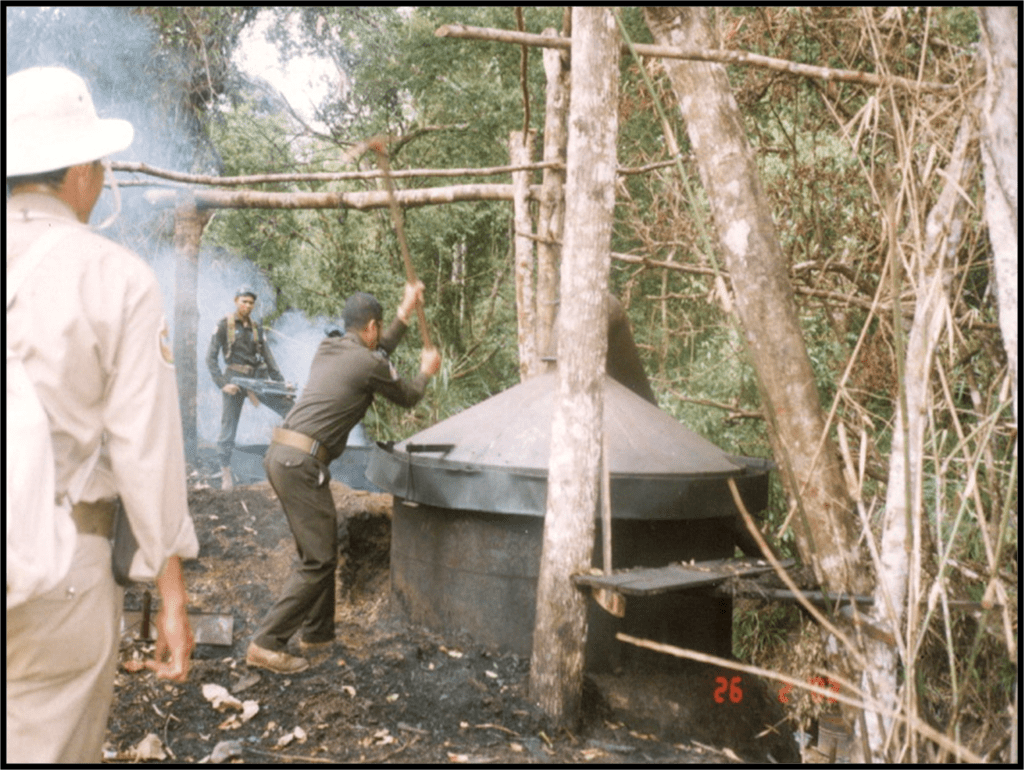 Logging of Mreah Prew trees was not the only environmental effect that the rush for safrole oil had on the Cardamom Mountains rainforest. Forest was cleared for laboratories to produce the oil and leakage into nearby streams was causing an environmental catastrophe. Factory workers were also poaching wildlife to be sold into the illegal pet trade or as bushmeat to restaurants.

Despite the practice being made illegal in Cambodia in 2007, the peak of the crackdown didn’t come until 2009 when Government Officials and a coalition of NGOs, including Wildlife Alliance, destroyed 5.7 tonnes of Safrole oil, enough to produce 44 million ecstasy tablets with a street value of $1.2 billion. The knock-on effect was so large it affected global ecstasy production. Searching for new alternatives to the oil, criminal networks turned to similar alternative synthesizes to fill the drop in supply, some of which were deadly and possibly linked to ecstasy related deaths in the UK. In fact, in 2009 a survey found that half of ecstasy seized in the UK was found to contain no MDMA, the active chemical ingredient.

Since the major crackdowns in 2009, no safrole oil factories have been sighted in the 1.4 million hectares of the Cardamom Mountains patrolled by Ministry of Environment – Wildlife Alliance rangers. Despite this, with the constant threat of logging and poaching, the work of the rangers to protect one of Asia’s last great rainforests is never over.