Many of the resident animals at Phnom Tamao Wildlife Rescue Center were originally kept as pets. However, many of these wild animals have very specific needs, such as specialized diets, and often exhibit aggressive behaviors or are hard to manage once they reach sexual maturity. As a result, people often surrender their pet only once it becomes sick or reaches adulthood and becomes a nuisance to keep.

One of the most recent animals that was surrendered to us from the pet trade is Storm, an infant pileated gibbon. Her owner brought Storm to the rescue center to see our vets after she fell ill but ended up surrendering her to our staff after learning it is illegal to keep this Endangered species as a pet. Our wildlife vets were able to treat Storm and she has now recovered and is receiving round-the-clock care at our nursery. However, Storm will never be able to be released into the wild because she has imprinted on humans and exhibits human behaviors. She has learned to wave her fists in front of her eyes (a human symbol for crying), holds eye contact, and smiles. The latter two behaviors would be interpreted as aggressive behaviors in gibbon society and would likely result in her being attacked or killed. Although she will not be able to survive in the wild, she is receiving excellent care from her keepers and has already been paired with another rescued infant male, who she will remain bonded with for the rest of her life. Her caretakers are even teaching her how to make gibbon calls and she is quickly learning to imitate them.

Although pileated gibbons are an Endangered species, they are still hunted for bushmeat. Unfortunately, the pet trade is interconnected with bushmeat hunting because when a mother is killed, the infant is captured to be kept or sold as a pet.

You can help us care for Storm and the many other victims of the pet trade at our rescue center by making a donation today. 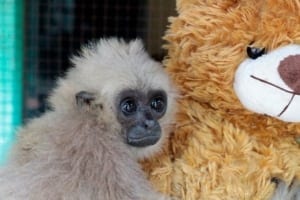